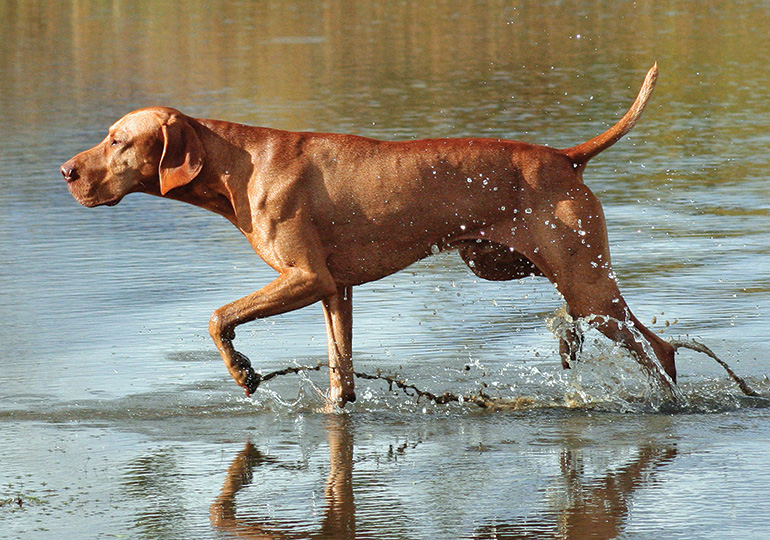 The Hungarian Vizsla has a long and sometimes romantic history and is the ‘national dog’ of Hungary. Wars in 20th century Europe led to significant reduction in numbers and loss of valuable breeding records. Those Vizslas that remained spread through a wider area of Europe and eventually arrived to other continents, gaining recognition in the UK in 1953, the USA in 1960, and coming to Australia in 1973.

Developed as an all purpose hunting companion, Vizslas proved to be valuable assistants to hunters in the pursuit of both fur and feather, on land or from water. They maintain these instinctive breed traits to this day, and in Australia accompany ‘rough shooters’, as well as those interested in the more ‘formal’ pursuits of Field and Retrieving Trials. In Europe and areas of North America where the more traditional method of hunting is permitted, some Vizslas work with falconers, whilst in Europe they are also used in the pursuit of larger game.

A medium sized, smooth coated, ‘hunt/point/retrieve’ breed, he comes in various shades of ‘one colour suits all’- a striking rich golden-red traditionally recognised and described by the breed standard as ‘Russet Gold’. Smallest of the smooth coated HPR’s, and a moderate dog in physical aspects such as size and angulation; he is described as elegant and should never be coarse in appearance.

Vizslas mostly retain the original breed traits, and combined with their biddable and intelligent character, their athleticism and willingness to be trained and to work can make them a great choice for competitive Obedience, Agility or Flyball. With their excellent scenting ability they also frequently excel at Tracking. However, when appropriately rewarded for correct behaviour and gently prevented from practising unwanted behaviour, they enjoy learning and training sessions.

With the potential to be an excellent companion and family dog, the Vizsla requires daily exercise, both mental and physical. As Vizslas like to swim, it is an excellent alternative or addition to the daily walk.

Vizslas cannot achieve their full potential when isolated from the family, and need more than a game in the backyard to satisfy them. Their love for people and need to be with the family mean they must be part of the daily routine. Vizslas can be tolerant with children, though they can frequently be too boisterous with very young children. As with all dogs, supervision is required and both children and puppies need to be

carefully shown how to behave calmly when together. Vizsla puppies are very busy and can have short attention spans for early training. Not always an ‘easy’ breed for novice owners, the breed is perhaps currently enjoying an unrealistic surge in popularity, with some new owners being disappointed by the reality of having an energetic gundog puppy in a busy household. Vizslas remain active and energetic for most of their lives.

Though exercise and training needs can be significant, grooming is generally in the ‘low maintenance’ category - the usual removal of dead coat with a brush or grooming mitt when there are seasonal changes, and an occasional bath or wipe over with a wet towel is about all that is generally needed, other than regular pedicures!

Vizslas have been reported with many of the diseases that affect other breeds and cross breeds. Cancer, epilepsy, immune mediated disease and hip dysplasia are all recorded in the breed. Research is underway in the UK on an apparent breed specific polymyositis, which so far has been seen more frequently in the UK than in other countries.

Words: Ros Leighton, on behalf of the Hungarian Vizsla Club of NSW

Now you know a little about the Hungarian Vizsla, you may think that this is the dog for you. Before you make a decision, please make contact with the breed club or your State controlling body for purebred dogs. They will be able to give you information about available puppies and also suggest dog shows where you can see the breed and speak to breeders. In this way you will gain a better perspective of the Hungarian Vizsla, and its needs and whether this breed would suit your lifestyle. 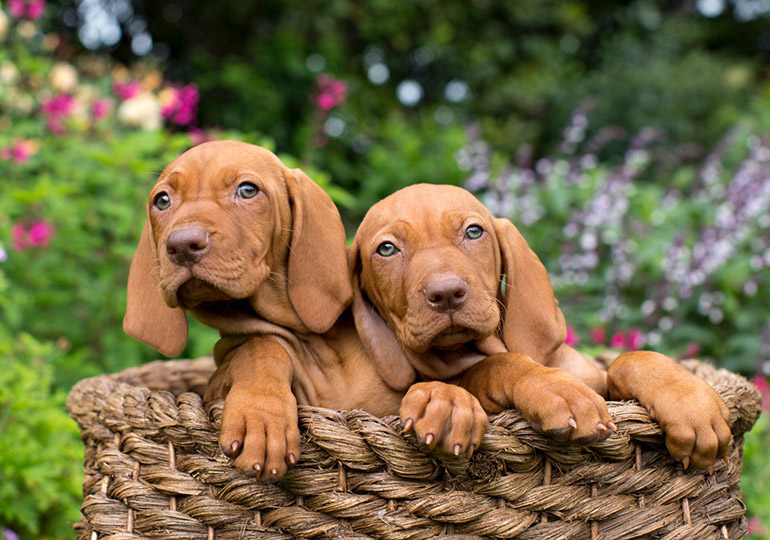