There is nothing more satisfying than sharing your life with a well trained canine companion. Reaching that goal is attainable and takes time, commitment and consistency and whether your dog is a puppy or a mature dog training will assist you in sharing a special relationship where your dog is a pleasure to have by your side, whether at home or in a social situation.

The day your puppy or more mature dog comes into your home is the day the dog starts to learn the rules by which you expect him to live. He will need to get out and meet the world with all its noises and movements and this can start at 8-12 weeks attending Puppy Pre School which is usually run by a Vet Clinic. The next step is to register at your local dog training club in NSW. Puppies can be registered at training clubs when they have received their final vaccinations usually at approximately 12 – 16 weeks.

Trained club Instructors will teach you to train your dog. This is the beginning of a special partnership you and your dog will share and build upon while learning to work as a team. Your puppy will learn to walk on lead without pulling, to sit, stay, drop and stand using voice and hand signals and the very important command, to come when called. As you and your dog gain confidence and learn new skills you will progress through the classes building on those skills already acquired. Once you and your dog are working well together there are other avenues where you can continue to develop skills and learn more and be introduced to the world of Obedience Trialling and Rally Obedience.

Whether your dog is a puppy or a more mature dog, has a Pedigree, is a rescue dog, or is a cross breed the basic training he has received at the local obedience club will enable you and your dog to get ready to enter the world of Obedience Trialling and Rally Obedience. To enter in these competitions you need a trained dog that is registered with a controlling body, in New South Wales and that is DOGS NSW either on the main register or associate register. You also need to be a member of DOGS NSW.

Please be warned that Obedience Trialling and Rally Obedience will open up a new world for you and your dog. Some people newly introduced to the world of obedience find trialling addictive and each weekend people head off with their dogs to compete in Obedience and Rally O, along the way forming friendships with like minded people. Often people go on to find other avenues in which they can compete with their dog, but no matter what dog sport is chosen, obedience is the key and is the basis of all training to have control over your dog.

There are five levels of Obedience in Australia plus Rally Obedience which also has different levels from Novice through to Master. All classes and rules are explained fully in the Obedience and Rally Obedience Rule Books which can be sourced from DOGS NSW.

There are five levels of obedience in Australia, CCD, CD, CDX, UD and UDX which become progressively more challenging. A title is achieved when the dog has three passes at that level. Most levels require a pass of 170 points or more out of 200, and the dog must pass every exercise within the level. The exception is the entry class of Community Companion Dog which requires 85 points out of 100 . All the exercises are based on useful things dogs can do for us and which make for a better companion.

This is the basic level of competition and is not a compulsory section.

In this class the exercises are:

Three passes of a minimum 85 points out of a possible 100 points under at least two different judges will qualify the dog for the award Community Companion Dog, which follows after the dog's name and is normally abbreviated to C.C.D. 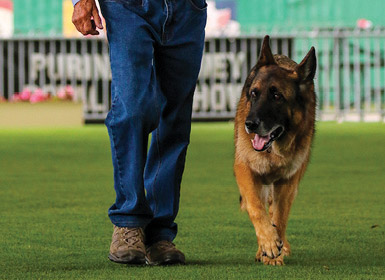 Obedience trialling at the Novice level consists of the performance of a number of exercises in a formal ring situation. These exercises are:

Three passes of a minimum of 170 points out of a possible 200 under at least two different judges will qualify the dog for the award Companion Dog, which follows after the dog's name and is normally abbreviated to C.D. 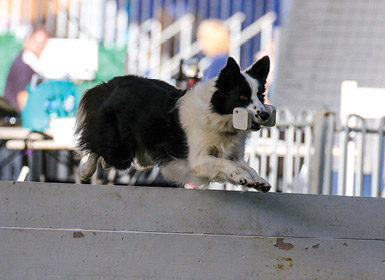 Most dogs enjoy this, it’s fun, but the expected standard of the work is higher and introduces jumping, and stays in which the handler is out of sight. The formal exercises are:

Three passes of a minimum of 170 points out of a possible 200 under at least two different judges will qualify the dog for the award Companion Dog Excellent, which follows after the dog's name and is normally abbreviated to C.D.X.

This gets really hard because the dog has to leave the handler and perform tasks which are more complex, although it looks easy watching a well trained dog going through the exercises. It introduces scent work, and demands a high level of training and understanding between dog and handler. The formal exercises are:

Three passes of a minimum of 170 points out of a possible 200 under at least two different judges will qualify the dog for the award Utility Dog, which follows after the dog's name and is normally abbreviated to U.D. 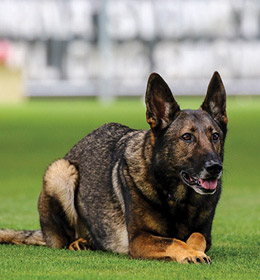 The exercises at this level extend on those in the Utility section but there is no jumping, so it suits our older dogs. The exercises are:

Three passes of a minimum of 170 points out of a possible 200 under at least two different judges will qualify the dog for the award Utility Dog Excellent, which follows after the dog's name and is normally abbreviated to U.D.X.

All Obedience titles are shown after the dog’s name and in fact become part of the registered name of the dog. If the dog achieves the title of – obedience champion - this title is shown before the name as O Ch.

If you want to know more about the serious side of obedience trialling, you should purchase a copy of the obedience rule book, available from DOGS NSW or download it from the ANKC website.

Rally Obedience (commonly called Rally) promotes a positive relationship between the dog and its owner, and it is a great way for the beginner to start trialling with their dog. Rally was designed as a way to introduce people who are working through their obedience levels into the world of dog sports and for everyone, whether they are seasoned triallers or not, to simply just have fun with their dog. Rally O provides an environment where the handler can encourage their dog by talking and rewarding by voice, but not handling the dog in any way.

Rally is often described as a combination of Agility and Obedience. A Rally course is set out with numbered stations including a start and finish. Handlers have the opportunity to walk the course to become familiar with it before competing. Dog and handler then navigate the course by following the numbers and carrying out the exercise shown on the sign positioned at each of the numbered stations. Dogs work in the “Heel” position between exercises.

At the entry level of Novice, dogs negotiate a course having between 10 and 15 signs (not including the start and finish) and work on lead during the test. There is a total of 57 signs available to be placed on a Rally course gradually increasing in complexity as the level of Rally becomes higher. The higher levels of Rally, Advanced, Excellent and Master use up to 24 signs including many of the more complex ones and the dog is required to navigate the course with the handler off lead. Encouragement by the use of word rewards and hand signals are permitted, but not touching the dog in any way.

In Rally competitors complete the course on their own while a Judge scores the round, but does not give voice commands or offer assistance. Rally has a far more relaxed atmosphere than other dog sports and each run is a different series of exercises and you never know what the course will be until you do the preliminary walk through.

Rules for the conduct of Rally Trials can be downloaded from the ANKC website or can be purchased as a booklet at DOGS NSW Office.