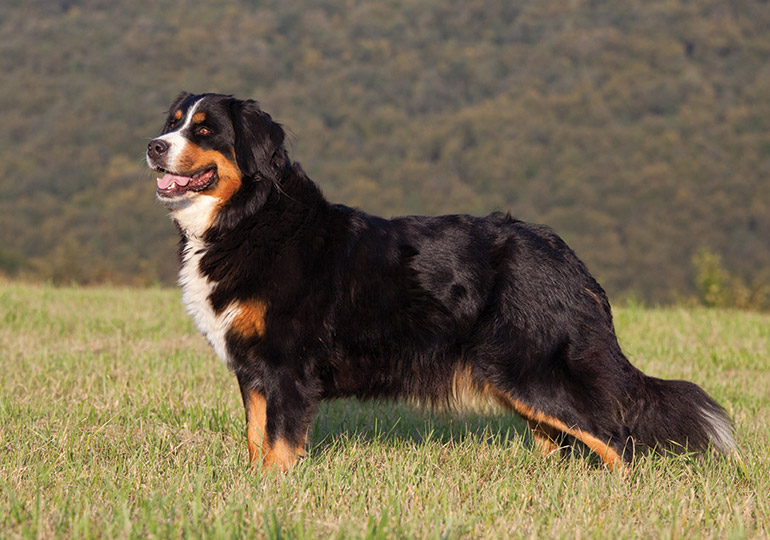 The Bernese Mountain Dog is one of a group of four Swiss working dogs known as Sennenhunde (sennen being Alpine herdsmen). After much research, Margret Bartschi, a Swiss authority on the breed, believes the mountain dogs originated in Switzerland, in the mountainous regions of Central Europe and Southern Germany. Their origins can be traced back in Celtic times, long before the Romans occupied the country in 58 BC. Each region developed the type of dog most suited to its particular needs and thus the four different types of Sennenhunde were established; Entlebucher being the smallest, the slightly larger Apenzeller, the Bernese and the Great Swiss. The Bernese is the second largest in size, being 58-70 cms (23 to 27.5 inches) high at the withers, and the only one with a long coat.

Today the Bernese Mountain Dog is well known and appreciated all over the world as a family dog, thanks to its striking tricoloured coat and its great adaptability.

Although the Bernese is called a mountain dog, it should not be confused with the St Bernard or the Pyrenean, being more like the Golden Retriever in outline, but somewhat heavier and stockier. The noticeable difference between the male and female Bernese is that the males are distinctly masculine and the females distinctly feminine. The correct male has a larger and bulkier body, usually a broader head and chest, and a heavier coat, particularly the bib on the chest. The female has a softer expression and demeanour and is smaller.

The general appearance of the Bernese is that he is an above medium size, strong, sturdy, working dog, who is active and alert, well-boned, yet agile, well balanced and striking in colour. The immediate thing that takes the eye is the striking contrast of colours, which are his basic body colour of shiny jet black, with clean white and rich tan, clearly defined, symmetrical markings. Their appearance is as attractive as their personality, basically gleaming black with a white muzzle and blaze, white cross on the chest and white paws and tail tip. Between the black and white on the legs

and cheeks is a rich chestnut or tan. The markings should be as symmetrical as possible and not haphazard as in some other breeds.

When pictured as a whole, the Bernese must be strong, agile, harmonious and well balanced, with straight and sturdy limbs.

There is no criteria for weight given in the Standard, however, most mature dogs’ weight averages 45-50 kgs in dogs and 38-40 kgs in bitches.

One of the breed’s main points is their outgoing friendliness. The temperament is very stable, being very affectionate, patient and especially good with children. They may be reserved with strangers initially, but are a superb and loyal family dog. For all their size, they are very active and take a lively interest in all that is going on.

To quote Professor Heim, who did much to establish the breed as we know it today: ‘All the Swiss Mountain Dogs are without deceit, excellent house and family dogs, by other breeds hardly to be surpassed for their attachment, loyalty, alertness and understanding’.

Bernese do not make particularly good kennel dogs, preferring to live and spend time with their owners, and live in a family environment. They love to be with people and love to be given affection, however, they are not constantly on the move in the house, demanding exercise, or retrieving objects to be thrown for them.

When visitors (strangers) arrive at the house they will bark. A good Bernese will observe his owner and react accordingly. If the owner receives the visitor in a friendly manner, he will be friendly too; if the person is dismissed, he remains reserved; a valuable attribute in a house dog.

The Bernese Mountain Dog is not considered a giant breed, but is quite late maturing. They usually reach their full adult height by about fifteen months, but can take a further two or three years to reach full maturity.

Now you know a little about the Bernese Mountain Dog, you may have think that this is the dog for you. Before you make a decision, please make contact with the breed club or your State controlling body for purebred dogs. They will be able to give you information about available puppies and also suggest dog shows where you can see the breed and speak to breeders. In this way you will gain a better perspective of the Bernese Mountain Dog and its needs and whether this breed would suit your lifestyle. 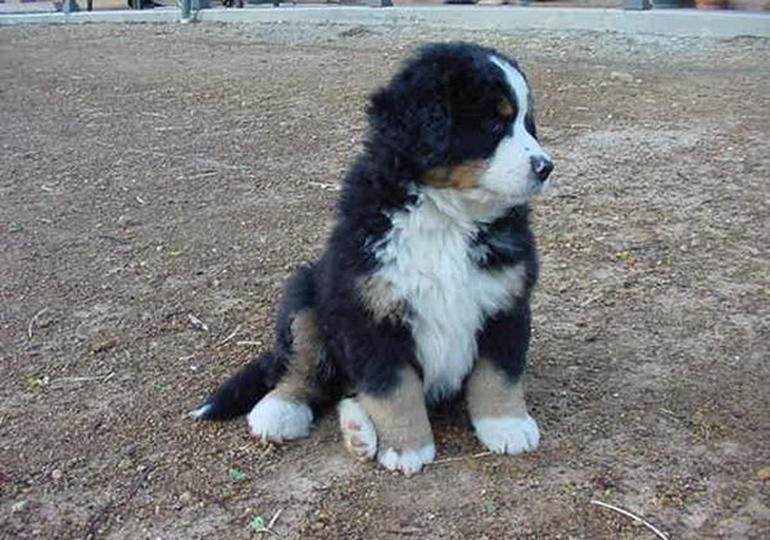