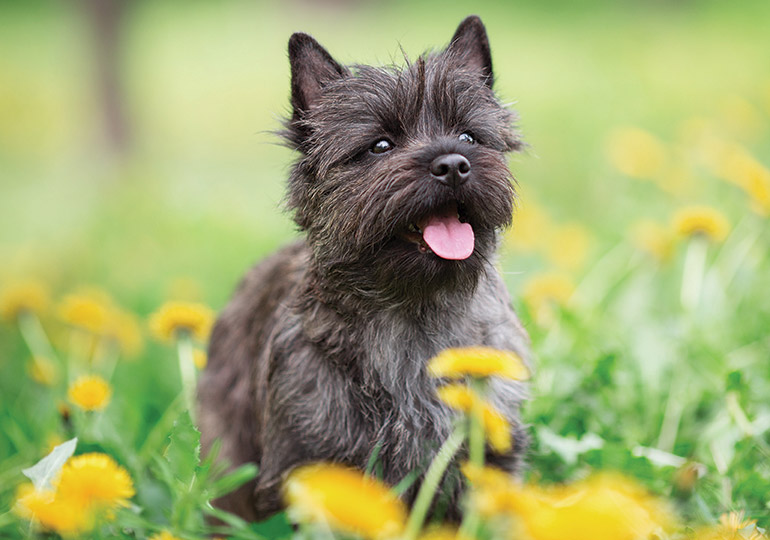 Originally from Scotland, the Cairn Terrier was trained to hunt foxes, badgers and otters in both the Western Highlands and the Isle of Skye. The work for which the breed was developed determined both its physical and temperamental characteristics.

Once referred to as the Short Coated Skye Terrier, the name Cairn Terrier was given to the breed when it was recognised by the English Kennel Club in 1912. The breed standard was revised in 1987, having remained virtually unchanged for the best part of 70 years. Today, the Cairn Terrier is a wonderful companion and can be seen in the show ring participating in Obedience, Agility, and Earthdog. It has also been used as a therapy pet.

From hunting badgers in Scotland to starring alongside Judy Garland in The Wizard of Oz, the Cairn Terrier has come a long way since being officially recognised in 1912.

The Cairn Terrier is an active and intelligent dog that displays a keen interest in its environment. Aggressive characteristics are not typical of the breed but it will never back down from a confrontation. However, it’s important to note the Cairn Terrier is unlikely to ever initiate such behaviour.

The breed’s easygoing nature and love of human companionship make it an excellent family pet. The Cairn is as happy at home on its owner’s lap as it is outdoors playing a game of fetch.

The breed has a natural afﬁnity with children and although it is relatively small in size, the Cairn Terrier is tough enough to enjoy the rough and tumble of playtime.

The breed is a small and active Terrier that holds its tail and ears high. Its eyes are bright and alert, as if it’s ready for anything. A key feature of the Cairn Terrier is its head, which is small but in proportion to the body.

The breed’s head should be well furnished with a soft but intelligent expression. There should be a sharp pronounced stop and the eyes should be dark hazel, of medium size and slightly sunken. The ears are small, pointed and set wide apart on the skull and when erect turn slightly outwards.

These characteristics, along with a shaggy brow, give the Cairn its lovely expression. Another feature of the breed is the coat. It should be profuse and double-coated with a harsh outer coat and a soft undercoat.

The Cairn Terrier comes in a range of colours ranging from cream, red, grey to almost black with brindle versions of all these colours also possible.

To maintain the coat correctly, hand stripping is required. Clipping or scissoring will soften the coat and destroy the lovely, harsh feel of the outer coat. This can lead to itchiness and other skin conditions.

A sturdily built breed, the Cairn stands between 28cm to 31cm at withers. Its weight should be in proportion to its height, ideally 6-7.5kg.

The breed is generally healthy and has an average life expectancy of 12-15 years. The major health issue with the breed today is porto systemic shunt (PSS), which is a disease of the liver.

Words: Robert Bartram on behalf of the Cairn Terrier Club of NSW

Now you know a little about the Cairn Terrier, you may think that this is the dog for you. Before you make a decision, please make contact with the breed club or your State controlling body for purebred dogs. They will be able to give you information about available puppies and also suggest dog shows where you can see the breed and speak to breeders. In this way you will gain a better perspective of the Cairn Terrier and its needs, and whether this breed would suit your lifestyle.