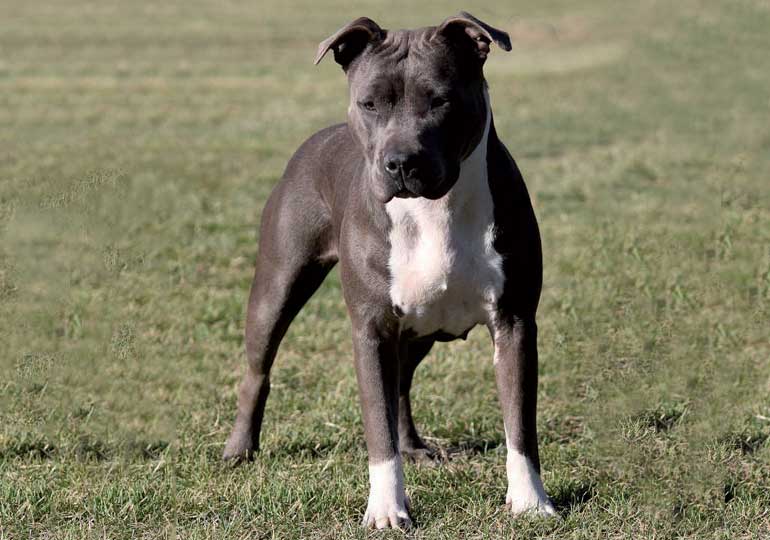 The modern American Staffordshire Terrier, also known as the ‘Amstaff’, is highly desired as a companion dog for its love, devotion and reliability, especially with children.

One of the world’s best known American Staffordshire Terriers was ‘Pete’, who starred in the popular 1930s television program The Little Rascals and was one of the first Amstaffs registered with the American Kennel Club (AKC).

The Amstaff also featured on American propaganda posters during World War 1 with the caption “I’m neutral but not afraid of any of them”. Certainly the Amstaff is a very courageous dog, and was well chosen to represent and motivate the American soldiers.

While the ancestry of the American Staffordshire Terrier dates back to the beginning of the 19th century, they were not officially recognised until the mid 1930s. During their long and sometimes confusing evolution, this breed has been known by many names including American Bull Terrier, Yankee Terrier, Staffordshire Terrier, Half and Half, and Bull and Terrier.

After the American Civil War ended in 1865, many British workers immigrated to America due to financial difficulties. They took their Bull and Terrier dogs with them and, in a very short period of time, the breed was popular among American citizens. The Bull and Terrier continued to be bred in America and over time the style of the dog changed, as did its name. In 1936 The Staffordshire Terrier Club of America was founded and the AKC officially recognised the Staffordshire Terrier.

Although the ancestors of the American Staffordshire Terrier were fighting dogs, selective breeding since the 1930s has always been moving this breed away from its fighting ancestry.

Such were the efforts of Amstaff fanciers to move away from dog fighting that, by the 1950s, the Staffordshire Terrier Club of America expelled any member who bred fighting dogs.

Dog fighting is now illegal, fortunately, but it is sometimes incorrectly cited as the early purpose of the Amstaff. In fact, it was developed as a general family and farm dog.

Early on, they were used for general farm work, hunting wild pigs, bears and other large game, and guarding the homestead. They have always been bred as a companion and family dog.

Although rarely used on the farm now, the talents that made them good all-purpose dogs are still found in the breed today.

The Amstaff is the ultimate canine athlete. It should give the impression of great strength for its size, but not be bulging with muscles like a body builder.

A well put together dog, it is muscular, agile and graceful.

It is an animal of beauty and balance that allows for agility, power and elegance with smooth, flowing lines. There should be no exaggeration in any one of its attributes, nor should it lack in any of the foregoing points.

The Amstaff’s short and shiny coat is easy to maintain. A brush to remove dry skin and dead hair twice a week is ample, and a bath is only required if the dog is smelly or muddy – once a fortnight is usually often enough.

The Amstaff is a highly active and affectionate dog, requiring regular exercise and activity, as well as plenty of time to interact with its human family. Socialisation and training are very important, and should begin as a puppy.

So far, no cases of hereditary ataxia have been reported in Australia, but it is a concern for the breed – genetic testing is available to identify carriers of the condition so that they can be removed from breeding programs.

Cardiac disease, hip dysplasia and elbow problems can affect the breed, so it is important to purchase puppies only from registered breeders who can provide evidence of health testing.

The Amstaff is not suited to all households. It must have a home that is willing to train and socialise it, provide regular exercise, and allow it to be a part of the whole family, then it will devote itself to all, including children.

Eyes: dark and round, low down in skull and set far apart.
Ears: set high; short and held rose or half pricked.
Mouth: upper teeth to meet tightly outside lower teeth in front.
Neck: heavy, slightly arched, tapering from shoulders to back of skull. Medium length.
Body: back fairly short. Slightly sloping from withers to rump with gentle short slope at rump to base of tail. Well-sprung ribs, deep in rear. All ribs close together. Chest deep and broad. Loins slightly tucked.
Feet: of moderate size, well-arched and compact.
Tail: short in comparison to size, low set, tapering to a fine point.
Gait: springy but without roll or pace.
Coat: short, close, stiff to the touch and glossy.
Colour: any colour, solid, parti, or patched is permissible; not all white, more than 80 per cent white, black and tan, or liver.
Sizes: height and weight in proportion. Height: dogs approx 46-48cm at shoulders; bitches approx 43-46cm at shoulders.

Words: Nicole Tetley on behalf of the American Staffordshire Terrier Club of NSW

Now you know a little about the American Staffordshire Terrier, you may think that this is the dog for you. Before you make a decision, please make contact with the breed club or your State controlling body for purebred dogs. They will be able to give you information about available puppies and also suggest dog shows where you can see the breed and speak to breeders. In this way you will gain a better perspective of the American Staffordshire Terrier and its needs and whether this breed would indeed suit your lifestyle. 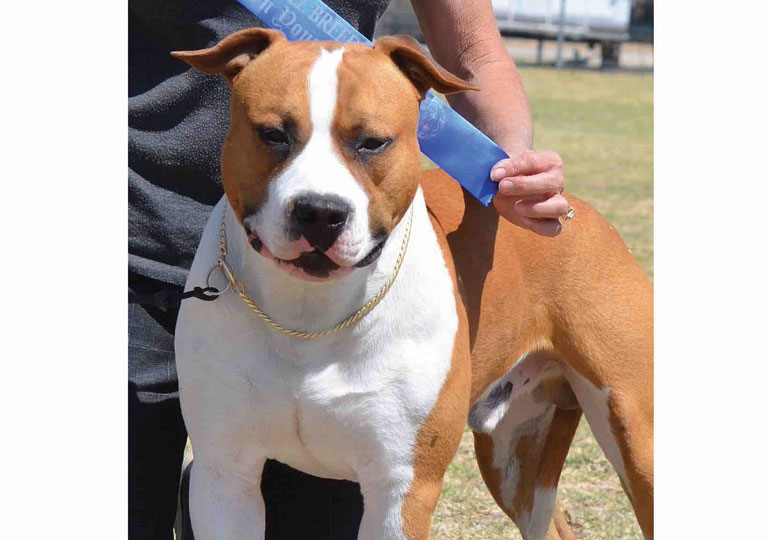 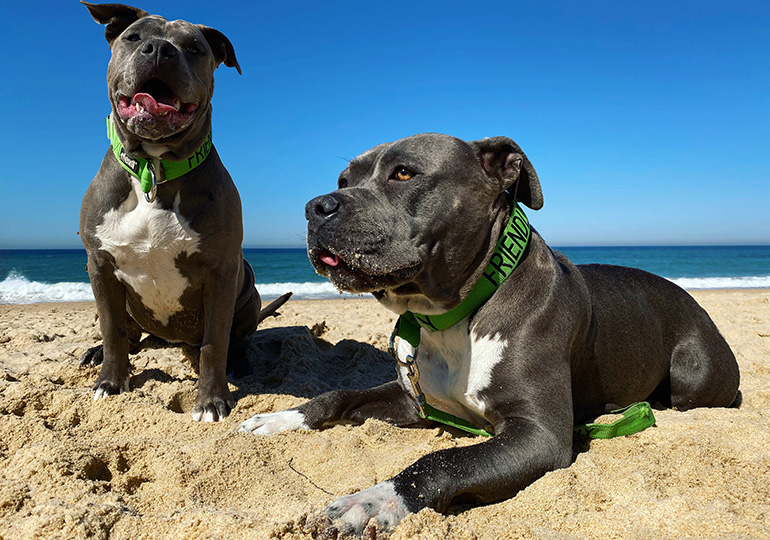 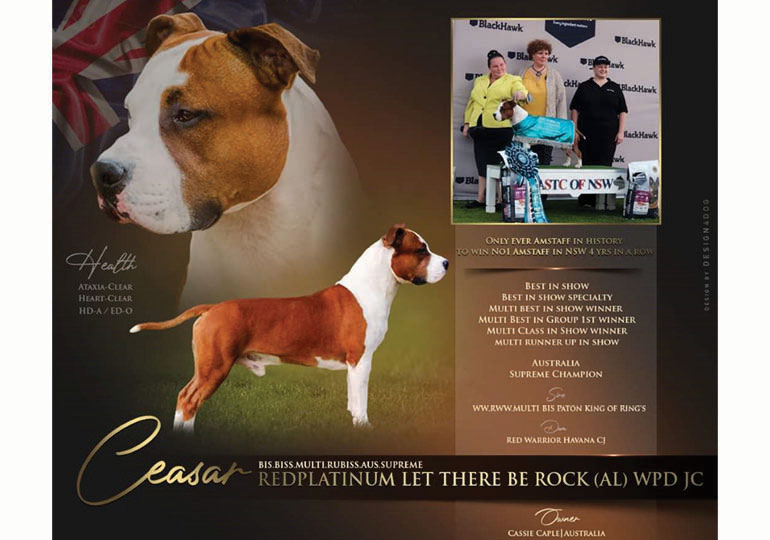 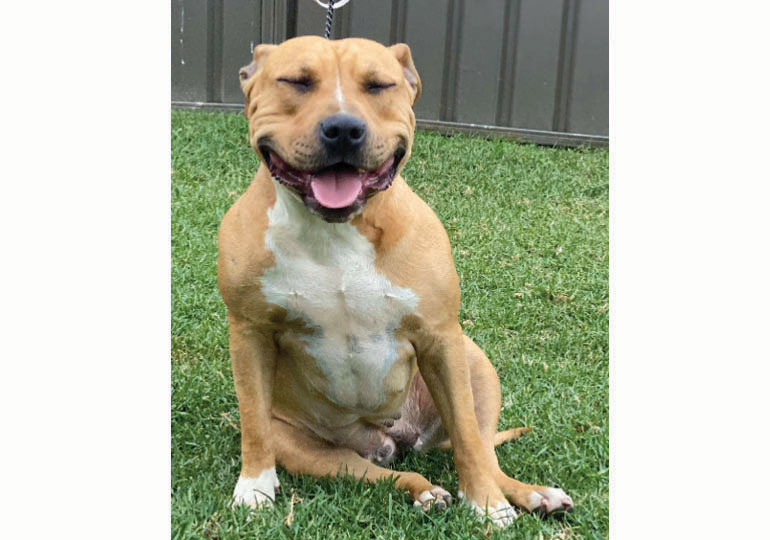 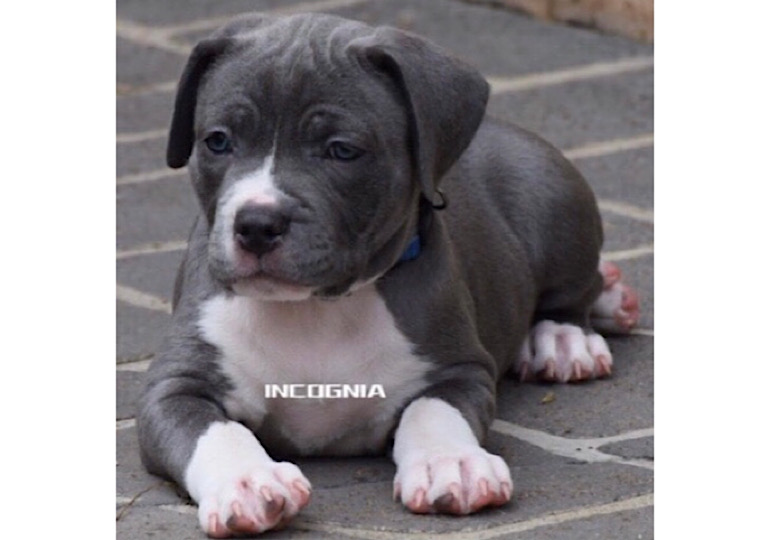