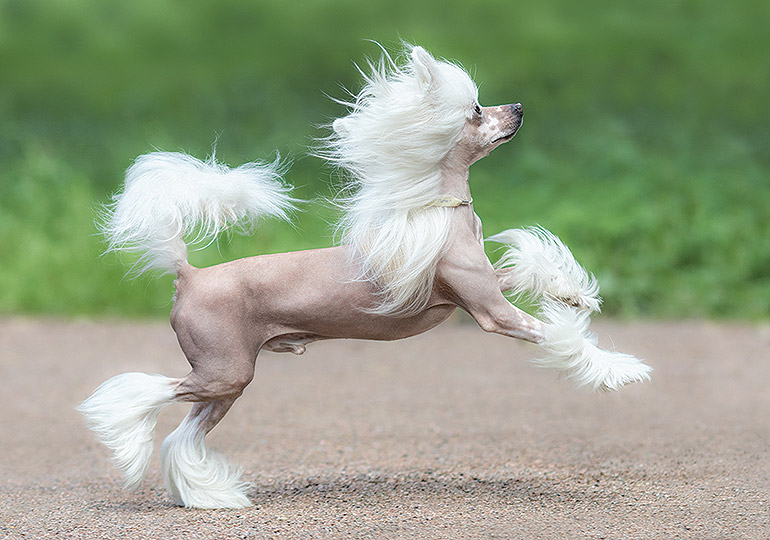 It is fascinating to imagine the Chinese Crested Dog as tiny Chinese Temple guards, with their manes plaited with gold and jade beads, or more humbly, as hot water bottles for Chinese pirates, The rise of genetic investigation is proving otherwise.

Certainly hairless dogs appeared in tropical and sub-tropical areas at various points in history and were known by many names. The fact is that the hairless mutation appears spontaneously even today in other breeds, or even other species. The most credible evidence (Berne University) suggests that the Chinese Crested Dog shares a common ancestor with other hairless breeds in Central and South America, where a hairless dog population first achieved sufficient numbers to be able to constitute a breed (‘Hairless Dogs - The Naked Truth’ by Amy Fernandez & Kelly Rhae).

The Peruvian Hairless Dog and the Xoloitzcuintle are the probable source, with the Chinese Crested Dog sharing the rectangular outline of the latter, rather than the square outline of the former. There is anecdotal evidence of the inclusion of small breeds, such as the Chihuahua, Pomeranian, Papillon, and a small hound (possibly a Whippet), which may account for the coated Crested being the only long-coated version of a hairless breed.

Mrs Deborah Wood of Florida, USA, kept meticulous records of her breeding, while the breed went in and out of favour with the AKC. Her Chinese Crested dogs, under the prefix of Crest Haven, together with the rescued and fostered dogs of the striptease artist, Gypsy Rose Lee and her sister June Havoc, form the basis of the breed today.

From 1965 to 1968, Mrs Ruth Harris of Staround lost four of her seven imports in quarantine in England. Finally, Gypsy Rose Lee, travelled with her three dogs and stayed with them in quarantine. Ultimately, Staround Ahn Ahn Lee became a foundation for the breed in the United Kingdom and elsewhere. Two of his grandchildren came to Mrs Win Jackson in WA to begin the Miniature Crested in 1974, and as Australians fell in love with these odd little creatures, many more arrived in subsequent years.

“With the two varieties (Hairless and Powder Puff) and the two types (Deer and Cobby) within both varieties, judging the breed can be complex. The two varieties, Chinese Crested Dog (Hairless) are structurally identical but visually quite different. Two distinct types of this breed; Deer type, racy and fine boned, and Cobby type, heavier in body and bone.” 2.

The Powder Puff should be as the Hairless, but covered with a soft veil of hair, including an undercoat with an overlay of guard hairs. Ears should be low-set and erect, except in the Powder Puff, where dropped ears are permissible. Other descriptions are small, active, graceful, happy and elegant. The two breed hallmarks are the bare feet: the word “extreme” has been removed from the Standard, (but nobody told the dogs), as they continue to use their elongated toes to hold bones and sticks, or cling to wire fencing. The second is hairlessness, which requires its own section:

The Fox13 mutation found in the Chinese Crested Dog, Peruvian Hairless Dog as well as the Xoloitzcuintle causing hairlessness, also affects dentition. Put simply, the canines are forward-pointing and rather tusk-like. Other manifestations can be smaller incisors, absent premolars or even fused teeth. This is not covered in the current standard, but remains true, nevertheless. This mutation is not a result of bad breeding, but of genetic disposition. The Powder Puff does not carry the hairless gene, so should have normal dentition. What has been affected by breeding practice is the degree of hairlessness. Many breeders selected for the glamour of long profuse furnishings, acquiring and tolerating the concomitant increase in body hair, to the point where some dogs require genetic investigation as to their variety. Principled breeders are now successfully, but slowly, clawing their way back. The furnishings on a hairless should be free of undercoat.

They are subject to the same health problems as other breeds. There is genetic testing available for PRA, PRCD, PLL, von Willebrand’s Disease Type II and others that principled breeders routinely test puppies. A test for epilepsy is in the pipeline. Dry eye, (Keratoconjunctiva Sicca) is known in the breed, but inheritance is not yet proven. There is no inherent whelping difficulties, given the streamlined outline of the breed.

The average Chinese Crested Dog is a clown, a besotted companion sometimes known to give the alarm about an impending health issue in his human, an agile climber, somewhat prey driven, anxious to please, suitable for Rally O, Agility, Obedience, Lure Coursing sports, and lying on the lounge with you, growling at any animal on TV. He is clean, has little odour, loathes getting his feet wet and sometimes even objects to having his feet handled.

The Chinese Crested Dog needs protection from too much sun, (but not chemically provided) and clothing to keep warm in the cold. He needs to be clean to prevent skin problems and coconut oil and sugar scrub is effective with this.

The Chinese Crested Dog is an addictive breed: their very “otherness” appeals to people but they are, after all, Toy dogs who eat what other dogs eat, reproduce naturally, live to their teens and are easily maintained.

Now you know a little about the Chinese Crested Dog, you may think that this is the dog for you. Before you make a decision, please make contact with the breed club or your State controlling body for purebred dogs. They will be able to give you information about available puppies and also suggest dog shows where you can see the breed and speak to breeders. In this way you will gain a better perspective of the Chinese Crested Dog and its needs, and whether this breed would suit your lifestyle. 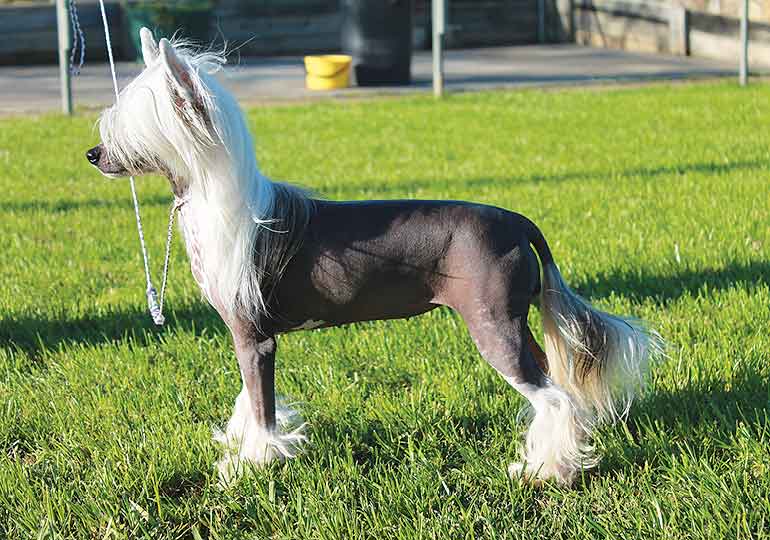