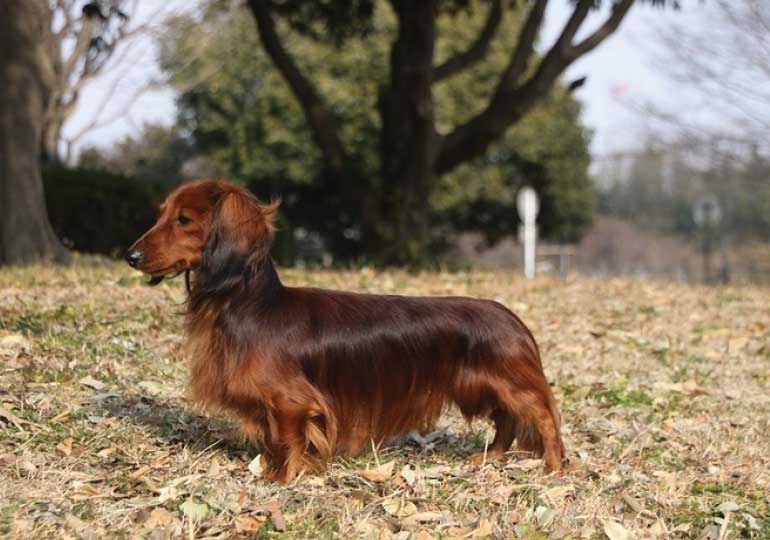 The Dachshund is a popular hunting dog, characterised by a very long body and short, stubby legs. The name "dachshund" is of German origin and means "badger dog." In addition to the Standard Dachshund, the breed also comes in Miniature and Kaninchen sizes.

The Miniature Dachshund and Kaninchen were bred to specialise in hunting small prey, like rabbits. In fact, the name "Kaninchen" is literally the German word for rabbit, and the breed is often referred to in English as the "Rabbit Dachshund.".

The Dachshund, also called Dackel or Teckel, has been known since the Middle Ages. From the Bracken, dogs especially suitable for hunting below ground were consistently bred. From these short-legged dogs, the Dachshund evolved and is recognised as one of the most versatile hunting breeds. He also shows excellent performance above ground, hunting while giving tongue, flushing and tracking wounded game. The oldest Club devoted to the breeding of Dachshunds is the “Deutsche Teckelklub” e.V., founded in 1888.

The Fédération Cynologique Internationale (World Canine Federation) differentiates between the Miniature Dachshund and Kaninchen based on two measurements taken when the dogs are 15 months old: chest width and weight. According to the World Canine Federation standard, Miniature Dachshunds can weigh up to 4 kgs (about 8.8 lbs) and have a chest measurement of between 30 and 35 cm (11.8 and 13.8 inches). The male Kaninchen can weigh up to 3.5 kg (7.7 lbs) and the female 3 kg (6.6 lbs). Kaninchens must have a chest measurement of 30 cm (11.8 inches) or less.

LONG-HAIRED COAT
Hair: The plain shiny coat, with undercoat and close fitting to body, is longer at the throat and on underside of the body. On the ears the hair must extend beyond the lower edge of ears. Distinct feathers on rear side of legs. Achieves its greatest length on underside of tail and there forms a full flag.
a) One-coloured: Red. Red with black overcoat. However, a clean dark colour is preferable. A small white spot (up to 3 cm diameter) is permissible on the chest.
b) Two-coloured: Deep black or brown, each with tan markings (the darker, the better and as clean as possible). A small white spot (up to 3 cm diameter), is only permissible on the chest. Too widespread, as well as insufficient tan markings are highly undesirable.
c) Colour pattern Dapple (Merle): The base colour is always the dark colour (black or brown).
d) d) Colour pattern Brindle: The colour of the brindle Dachshund is red with dark brindle.

Friendly by nature, neither fearful nor aggressive, with even temperament. Passionate, persistent and fast hunting dog with an excellent nose.

We recommend that puppy buyers ask about any history of back problems and avoid buying puppies from parents with exaggerated length of body or excessively short legs.

Now you know a little about the Dachshund Kaninchen (Long Haired), you may think that this is the dog for you. Before you make a decison, please make contact with the breed club or your State controlling body for purebred dogs. They will be able to give you information about available puppies and also suggest dog shows, where you can see the breed and speak to breeders. In this way, you will gain perspective of the breed and its needs and whether it would indeed suit your lifestyle.