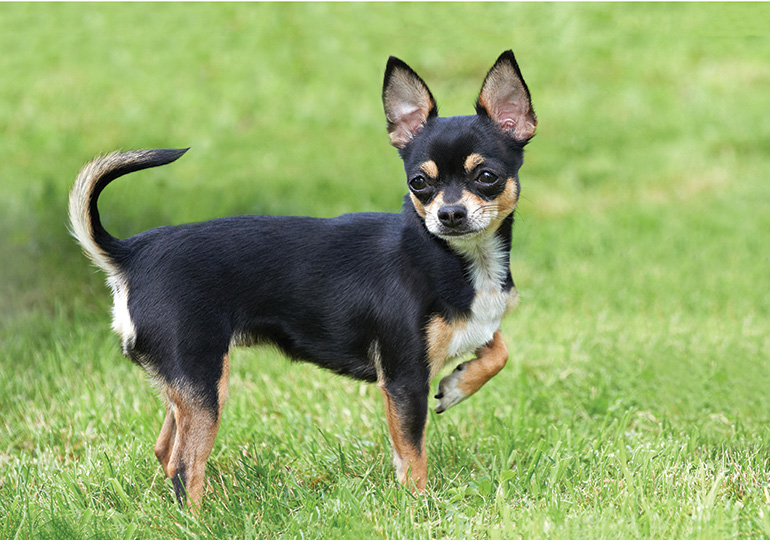 The Chihuahua may be small, but what it lacks in size it more than makes up for in personality.

Ask just about anyone what the world’s smallest dog is and they will almost always respond ‘the Chihuahua’. This wonderful little dog is one of the best known of all our canine friends. However, as well known as it is, the breed’s history is unclear.

Some say it originated from (and was therefore named after) the largest state in Mexico – Chihuahua. Some say the breed came from Malta and a painting of a little dog resembling a Chihuahua appears in a Botticelli painting in the Sistine Chapel. This painting was finished ten years before Columbus returned from his discovery of the new world. Just another piece of the Chihuahua’s puzzle.

With archeology and folklore combined, it appears as though the breed goes right back to the central American states, and is therefore deserving of the name Chihuahua.

The Chihuahua was recognised as a show dog by the ANKC in 1904 and the first Australian imports arrived in the 1930s. However, it was not until the 1950s that the breed made an appearance in Sydney.

The standard, though brief, captures all the attributes of the breed. The Chihuahua is a small, dainty and compact breed that moves swiftly with a brisk, forceful action.

The head is apple-domed and, although no longer in the breed standard, the extended standard explains that a Chihuahua may or may not have a molera – a ‘hole’ in the Chihuahua’s head similar to a fontanelle in human babies. In times past, the molera has been accepted as a mark of purity in the breed and occurs when the bones in the head are not firmly knitted together.

The standard describes the eyes as large, round, not protruding and can be dark, ruby or light in light coloured dogs.

The ears help to make the Chihuahua the dog that it is – they are large, flaring and set at an angle of approximately 45 degrees giving breadth between the ears. They are carried erect and not tipped or broken down.

The Chihuahua was recognised as a show dog by the ANKC in 1904.

The mouth has full dentition and a normal scissor bite. The neck is slightly arched and medium in length. The shoulders are well laid, lean, sloping into slightly broadening support above straight forelegs set well under the chest. This provides freedom of movement without looseness. The back is level and from the point of shoulder to the rear point of croup is slightly longer than the height at withers.

The Chihuahua’s feet are small and dainty, turning neither in nor out, neither hare- nor cat-like. The tail is a unique feature of this wonderful dog: furry and flattish in appearance, it broadens slightly in the centre and tapers to a point. It is carried up and over the back, known as a sickle tail. When the Chihuahua is moving, the tail should never be carried tucked under the body nor curled below the topline.

A big plus for the Chihuahua is that it can be any colour or combination of colours except merle. The breed preferably weighs between 1.8 and 2.7 kilograms.

The Chihuahua is a gay, spirited and intelligent dog that adores its family. It loves nothing more than spending time with its owners and loves a cuddle. Despite its size, the Chihuahua has definite watchdog qualities and will alert its family to anyone it is not familiar with.

The Chihuahua enjoys a daily walk but does not require lots of exercise. With this in mind the breed would make a suitable pet for a time-poor family, singles or an older owner.

Due to its size, the Chihuahua also does not need a big backyard and can happily live in a small space as long as it gets plenty of love and attention.  However, if left outside and ignored, this little dog is capable of wreaking havoc in the garden.

Some breeders are wary of selling puppies to families with young children, as the breed can be easily injured, again due to its size. With some help from early training and socialisation, the Chihuahua will get on with most people.

The breed, while generally sound, is prone to loose kneecaps (subluxation of the patella). When it occurs, the kneecap on the rear legs slips out of its groove. At times, surgery may be required but a Chihuahua with a mild case can live a normal life. Buying from a reputable and registered breeder will reduce the possibility of buying a puppy with an inherited problem.

Hypoglycemia means low blood sugar is a common problem in young Toy breed puppies, although most of them grow out of it before they are old enough to leave the breeder.

A weekly brush will keep the Chihuahua’s smooth, soft coat in order. Ensure both the eyes and ears are cleaned regularly and check if the toenails require clipping each month. If needed, a bath each month is sufficient – but take care not to get water in its ears as infection can occur.

Words: Betty Stepkovitch on behalf of the Chihuahua Club of NSW.
Source: www.ankc.org.au

Now you know a little about the Chihuahua (Smooth Coat), you may think that this is the dog for you. Before you make a decision, please make contact with the breed club or your State controlling body for purebred dogs. They will be able to give you information about available puppies and also suggest dog shows where you can see the breed and speak to breeders. In this way you will gain a better perspective of the Chihuahua (Smooth Coat), and its needs and whether this breed would suit your lifestyle.