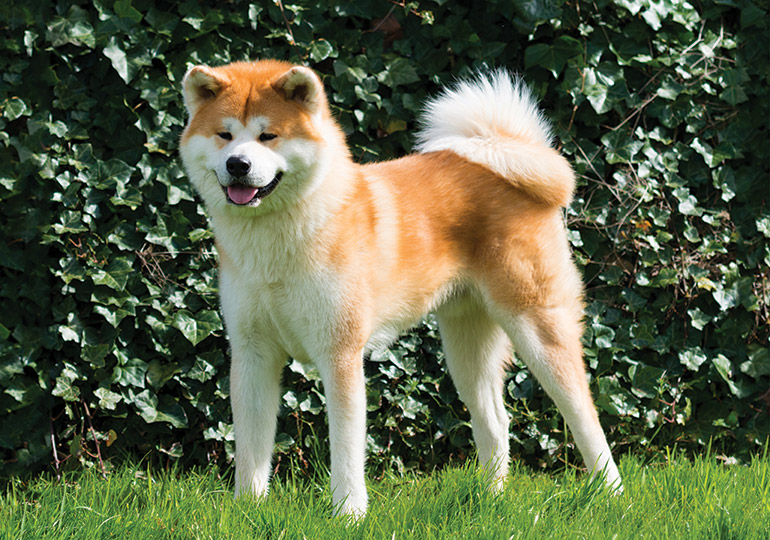 Originally Japanese dogs were small to medium in size and no large breeds existed. However, since 1603, in the Akita region, Akita Matagis (medium-sized bear-hunting dogs) were used as fighting dogs. From 1868 Akita Matagis were crossed with Tosas and Mastiffs and consequently, the size of this breed increased but characteristics associated with Spitz type were lost.

In 1908 dog fighting was prohibited but this breed was nevertheless preserved and improved as a large Japanese breed.  As a result, nine superior examples of this breed were designated as “Natural Monuments” in 1931.

When World War II ended, Akitas had been drastically reduced in number and existed as three distinct types; 1) Matagi Akitas, 2) Fighting Akitas, and 3) Shepherd Akitas. This created a very confusing situation in the breed. It was fortunate for the Akita that soon after the war, interest in the Akita as a National Treasure was restored, and steps were taken to assure the breed’s survival. Japanese Akita fanciers then worked toward restoring the original Japanese Akita type, which we see today.

In the late 1940’s and early 1950’s American servicemen stationed in Japan began taking Akitas home to America.  Because many arrived in the United States before the Japanese had refined the breeding stock in Japan, they arrived in America in a variety of types.

These Akitas became the foundation breeding stock for the American Akita as it is known today.  The influence of the German Shepherd Dog and the Mastiff can still be seen in the American Akita, especially in the boning and colouring of the dogs.

In 2013 the ANKC accepted the standard of the Japanese Akita as a separate entity to the American Akita, and after consultation with Akita fanciers and breeders, the decision was made that the Akita would go into our conformation ring as Akita, followed by Akita (Japanese).

The standard calls for a large sized dog standing 67cm for a Dog and 61cm for Bitches, with a tolerance of 3cm more or less. Even with the tolerance, the Japanese Akita should not stand as tall as the American Akita in the Group lineup.

The standard goes on to describe the appearance of the Japanese Akita as sturdily built, well balanced and with much substance and a tough constitution. Differing only in the appearance to the American Akita standard by not including “powerful alert, and heavily boned” The colour of the Japanese Akita should be red fawn, sesame, brindle and white.

The temperament is composed, faithful, docile and receptive.

The Japanese Akita generally enjoys a healthy life and rarely needs veterinary attention. He lives to around 15 years, with an average of 10 years.  To maintain good health the Japanese Akita should be groomed weekly with a wire brush, ears cleaned & nails cut, and a bone weekly to keep the teeth clean, but does not require any clipping. Keep in mind that the Akita will drop coat, as per a number of the Spitz breeds.

The Japanese Akita will make a welcome addition to the family, strongly bonding with the family members so much so that he will stress when separated from his family.

Now you know a little about the Akita (Japanese) you may have think that this is the dog for you. Before you make a decision, please make contact with the breed club or your State controlling body for purebred dogs. They will be able to give you information about available puppies and also suggest dog shows where you can see the breed and speak to breeders. In this way you will gain a better perspective of the Akita (Japanese) and its needs and whether this breed would suit your lifestyle.