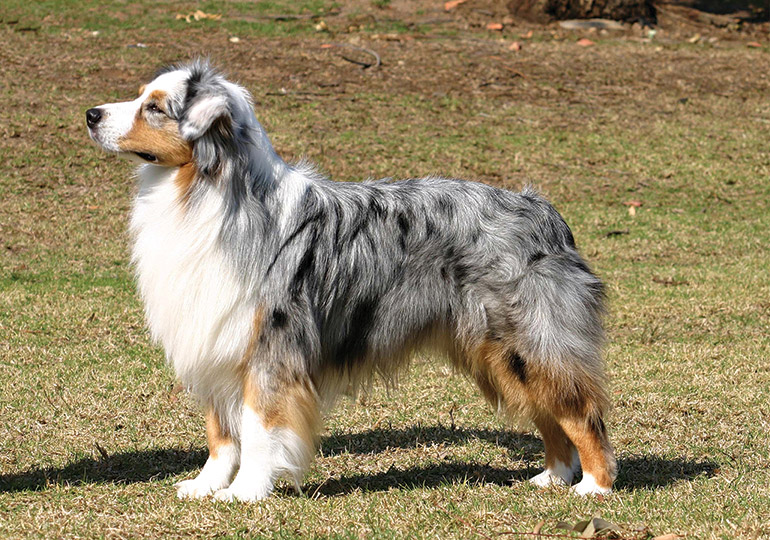 Contrary to their name, the Australian Shepherd, as a breed, was developed in America, but their early ancestors can be traced back to the late 1800’s and early 1900’s, where it is believed that the Basque shepherds arrived from Australia with large bands of sheep and with them, their ‘little blue dogs with bob tails’.

Australian Shepherds are a medium sized breed with the preferred height for females ranging between 45.5 - 53.5cm and for males 51 - 58.5cm, however quality is not to be sacrificed in favour of size.

Everything about the Aussie is to be ‘moderate’ including their double coat. Acceptable colours are Blue Merle, Black, Red Merle and Red. With the addition of white or copper/tan trim the solid colours are known as Bi coloured, and with the addition of both white and Copper/Tan trim they are known as Tri coloured. Most Aussies only need grooming on a weekly basis, but this will most likely increase at times of seasonal shedding.

Eyes are almond shaped and colour can be brown, blue, amber or any combination thereof. Aussies can be found with two eyes of the same colour, each of a different colour, or a mixture or marbling of colours within each eye. Ears are triangular in shape and have lift, creating the proper attentiveness. Intelligent, alert and eager with a keen expression, often referred to as the ‘look of eagles’.

A naturally bobbed tail is an identifying breed characteristic, often appearing anywhere from a very short bob all the way through to a full length tail.

The Australian Shepherd is an intelligent working dog of strong herding and guarding instincts. He is loyal companion and has the stamina to work all day. The variety and individuality in colour are unique to the breed. 1.

Australian Shepherds are intelligent and active dogs with a good disposition and strong herding and guarding instincts. They can be reserved with strangers but should never be aggressive or fearful and should be well socialised as young pups to ensure a happy, well balanced, adult dog. Aussies make wonderful family dogs and are good with children and other pets.

The Australian Shepherd is generally a very healthy breed and most live to between 12-15 years, but of course there are always exceptions to the rule. Most breeders do extensive health testing to ensure the breed remains as healthy as possible for generations to come.

Some of the main concerns in Aussies are Hereditary Cataracts (HSF4) and all owners need to be aware of the sensitivities of the Multi Drug Resistance (MDR1) mutation. Hip and Elbow scoring is widely conducted, the breed average is 9, which continues to gradually lower. Extensive research is being conducted through the Australian Shepherd Health and Genetics Institute in the US, which helps breeders monitor and assess for where and what they need to be health testing. The Institute also offer guidance for those that do not currently have tests available.

While the Australian Shepherd is a working breed and loves nothing more than to be given a job to do, they are still able to settle into normal suburban life. Most Aussies need mental stimulation and if both their physical and mental needs are met, they can be a wonderful family addition. If their needs are not met, they can be destructive like any breed. Of course, there is the odd couch potato for the more laid back family, however a good breeder will have a good idea of drive levels of each pup, which can vary within a litter.

Aussies make excellent dog sport candidates and with their high intelligence and willingness to please, are extremely fast learners. Aussies excel in Obedience, Rally O, Agility, Flyball, Dancing with Dogs and of course most are found to be excellent in the herding arena, should they be given the opportunity to do what they were actually bred for. In fact, there is not much an Aussie can’t do.

Now you know a little about the Australian Shepherd you may have think that this is the dog for you. Before you make a decision, please make contact with the breed club or your State controlling body for purebred dogs. They will be able to give you information about available puppies and also suggest dog shows where you can see the breed and speak to breeders. In this way you will gain a better perspective of the Australian Shepherd and its needs and whether this breed would suit your lifestyle. 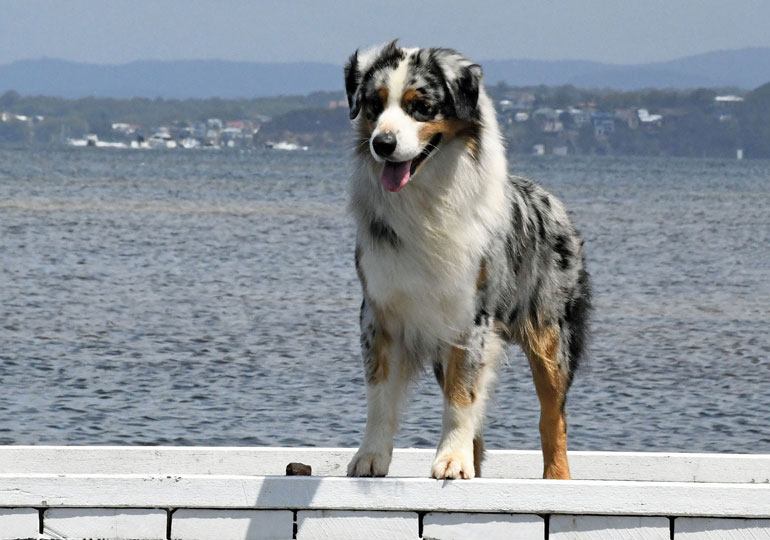