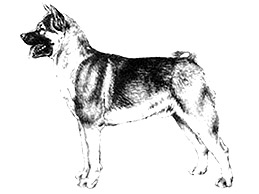 Large, powerful alert, with much substance and heavy bone.

Large, broad head, with relatively small eyes and erect ears carried forward in line with back of neck; large, curled tail, in balance with head.

Dignified, courageous, aloof, tends to show dominance over other dogs, though the trait is not encouraged.

Large, in balance with body, skull flat, forehead broad, defined stop and clear furrow. Head forms blunt triangle when viewed from above, free from wrinkle. Muzzle broad and strong, cheeks well developed. Nose large and black, bridge straight. Lips tight and black. In white dogs flesh coloured pigmentation is permissible on nose and lips. Length from nose to stop is to length from stop to occiput as 2 is to 3.

Strongly erect, relatively small, thick, triangular, not low set, carried forward over eyes in line with back of neck when viewed in profile. Moderately set apart; slightly rounded at tips.

Jaws strong, with a perfect, regular and complete scissor bite, i.e. the upper teeth closely overlapping the lower teeth and set square to the jaws.

Thick and muscular, comparatively short, widening gradually toward shoulders. Pronounced crest blends with back of skull.

Longer than high, as 10 is to 9 in males, 11 to 9 in bitches. Chest wide and deep, depth of brisket is one half height of dog at shoulder. Well developed forechest. Level back, firmly muscled loin, moderate tuck up. Skin pliant but not loose.

Strong and muscular. With only moderate angulation and stifle. Well-developed thighs, strong hocks. Well let down, turning neither in nor out.

Large and full, set high, carried over back, full or double curl, always dipping to or below level of back. On a three-quarter curl tail, tip dips down flank. Root large and strong. Hair coarse, straight and full with no appearance of plume. Sickle or uncurled tail highly undesirable.

Vigorous, powerful and fluent with strides of moderate length. Back remains firm and level. Hindlegs move in line with front legs, whilst gaiting may single track.

Outer coat coarse, straight, and standing off body. Undercoat soft and dense. Coat at withers and rump is approximately 5 cms (2 ins), slightly longer than on rest of body, more profuse on tail. No indication of ruff or feathering.

Any colour, except merle, including white brindle or pinto. Colours are brilliant and clear. Markings are well defined with or without mask or blaze.