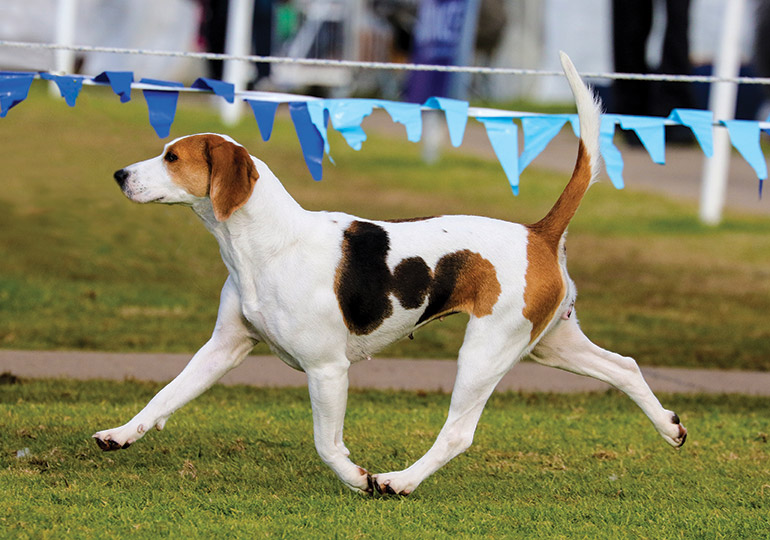 Sources have widely conflicting stories about the origins of this breed. According to one, the earliest Harrier types were crossed with Bloodhounds, the Talbot Hound, and even the Basset Hound. According to another, the breed was probably developed from crosses of the English Foxhound with Fox Terrier and Greyhound. And yet another, the Harrier is said to be simply a bred-down version of the English Foxhound (1), which apart from a few finer points is it is. The first Harrier pack in England was established by Sir Elias de Midhope in 1260 and spread out as a hunting dog throughout the west of England and into Wales. (1) Although having been around for all these years, the breed was finally only recognised by the Kennel Club in 2019, and first shown at Crufts in 2020.

In any case, today's Harrier is between the Beagle and English Foxhound in size and was developed primarily to hunt hares, though the breed has also been used in fox hunting. The name, Harrier, reveals the breed's specialty. The Harrier has a long history of popularity as a working pack dog in England. (1)

The points of the modern Harrier are very similar to those of the Foxhound. The Harrier however is smaller than the Foxhound: the most popular size is 19 to 21 inches (48.26 to 53.34 cm) Proportion - is off square. The Harrier is slightly longer from point of shoulder to rear projection of the upper thigh than from withers to ground. He is active, well balanced, full of strength and quality. (2)

The main differences with the Foxhound, apart from the size, is firstly the expression, which is described as bold in the Harrier rather than keen in the Foxhound. This is because of the very prominent eyebrows in the Harrier. The second difference is the tail, which is slightly lower set than the Foxhound and carried from between 12 o’clock and 3 o’clock, so generally carried slightly away from the body. (3)

Friendly and not aggressive. Essentially a Pack Hound. (2)

The Harrier is cheerful, sweet-tempered, tolerant of people, and it is excellent with children. This pack dog is good with other dogs, but should be supervised with non-canine pets unless it is raised with them from puppyhood. It prefers life in a pack with people, dogs, or both. This active dog likes to go exploring, sniffing, and trailing, so be sure to keep it on a leash or in a safe enclosed area. Some Harriers like to bay. (1)

They are a high energy dog, that requires regular exercise, whether that be just going for a walk or playing with family members, which they love to do. It is important that they do get this, so they are not too mischievous around the yard. (3)

Now you know a little about the Harrier you may have think that this is the dog for you. Before you make a decision, please make contact with the breed club or your State controlling body for purebred dogs. They will be able to give you information about available puppies and also suggest dog shows where you can see the breed and speak to breeders. In this way you will gain a better perspective of the Harrier and its needs and whether this breed would suit your lifestyle.