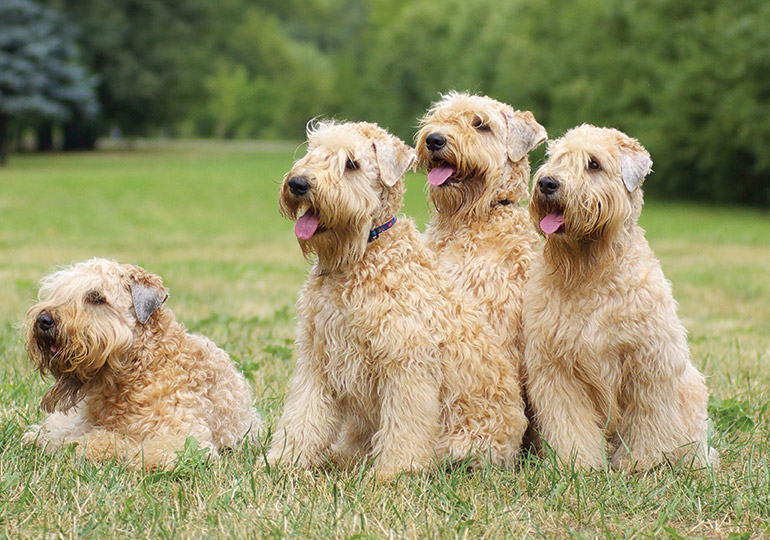 The Soft Coated Wheaten Terrier was a very common dog in Ireland for over 200 years. Its humble beginnings probably came from a very mixed ancestry that then combined with the more recent Irish Terriers, but are unlike the Kerry Blue and Irish Terriers, which were deliberately bred from an early date. Wheatens were seen as the poor people’s dog, owned by the peasants and crofters (farmers that worked plots leased by wealthy land owners). They were not permitted to keep a dog over the value of five pounds and these dogs were bred to earn their keep, by hunting badgers, otters and vermin, do some poaching, herd, be a family pet and companion, to stand guard and sound the alarm (although they would probably lick the intruders to death upon arrival).

By the 1930s, Soft Coated Wheaten Terrier enthusiasts in Ireland, namely Dr G Pierce and Mr P Blake, were more selective and developed the breed’s distinctive traits. The breed was then officially recognised by the Irish Kennel Club in 1937 and started to win many hearts. Over the next 35 years the breed spread to England, Europe, America, and arrived in Australia in the 1970s.

The Soft Coated Wheaten Terrier is a sound, medium sized breed with no exaggerations and has a coat colour that resembles a field of ripened wheat. The Wheaten’s black rimmed, dark hazel eyes are coverd with a profuse ‘fall’ and long silky furnishings cover their entire face. As there are a number of variations of coat type around the world, puppies can vary, from having harsh deep red coats (traditional), through to the more profuse and fluffy baby coats, more commonly seen on the English and American dogs; all of which can mature to the correct soft, silky, flowing adult coat. The correct adult coat should be established by around three years of age. Many puppies have quite a heavy black mask and quite a deal of black through the coat.

These pups will normally become a good wheaten colour. As adults, silver grey or ginger shading is acceptable on ears and muzzle only, with no more than a light showing of darker guard hairs through their clear wheaten coat. Both extremes of colour (pure white or deep red) are unacceptable in the adult. By the time a Wheaten reached adulthood, it should have a silky soft, flowing coat, that is never wiry or woolly, that hangs in loose curls or waves and shines like spun gold in the sun.

The Wheaten is a loyal dog that is full of confidence. It is also very intelligent and inquisitive, but has the steadiness of a working dog, especially if it is socialised and trained early. This breed does not lose the fun loving ways of their puppyhood as they get older.They are known to retain medium to high energy levels throughout their life and often give the ‘Wheaten whirl and hug,’ which is spinning around at break-neck speed and then jumping up to give a big hug to family and friends to show their affection and joy.

This breed is basically a very healthy dog that, given proper care and nourishment, will live a long and active life, with an average lifespan of 14 years. All breeds, however, are susceptible to inherited disease and the Wheaten is no exception. Veterinary research has identified two possibly genetically transmitted conditions, which seem to have a higher than normal incidence in Wheatens; protein-losing nephropathy (PLN) and protein-losing enteropathy (PLE). Addison’s Disease also occurs and renal dysplasia (RD) has also been a serious problem with Wheatens.

Considered to be a medium to high maintenance breed, the Soft Coated Wheaten’s coat requires frequent grooming to remain clean, shiny and free of dead hair and matts. Dirt and mud will simply brush out once dry. The coat does not shed, therefore requiring removal of dead hair by brush and comb, but with regular trims, the texture allows this to be accomplished in a relatively short session. The Wheaten is ideal for those who plan to keep them indoors and those owners prone to respiratory problems.

Because of their natural exuberance, it is important that Wheatens are fairly disciplined from an early age. They are very sensitive to differing tones of voice and most try their hardest to please. Wheatens easily adapt to country or city living, all family members and most household pets, when raised together, depending of course on individual personalities.

It is recommended that parents with small children should wait until they are older before purchasing a Wheaten. This is because their exuberance and tendency to get easily excited may overwhelm and upset smaller children. To avoid tears, being jumped on, or knocked over, all children should be supervised if they are playing with a Wheaten.

Those who do not have the time to give regular exercise, to expend some of the Wheaten’s high energy levels, should think twice before purchasing the breed.

Now you know a little about the Soft Coated Wheaten Terrier, you may think that this is the dog for you. Before you make a decision, please make contact with the breed club or your State controlling body for purebred dogs. They will be able to give you information about available puppies and also suggest dog shows where you can see the breed and speak to breeders. In this way you will gain a better perspective of the Soft Coated Wheaten Terrier and its needs, and whether this breed would suit your lifestyle. 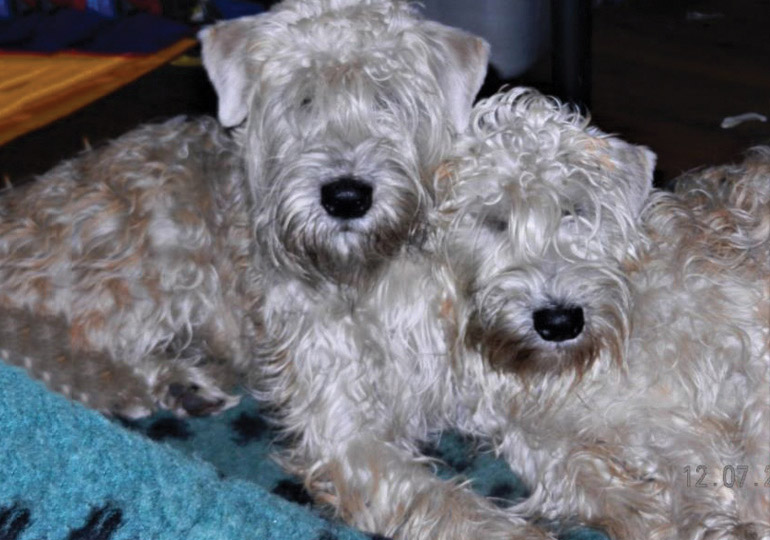