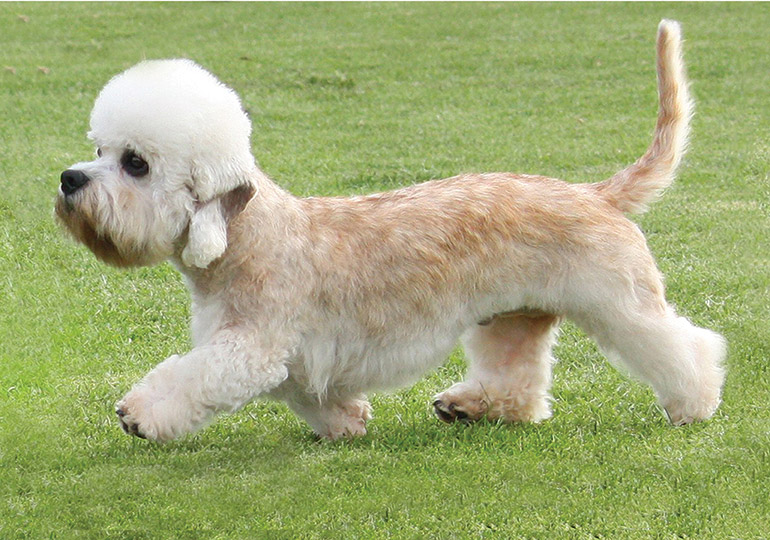 The Dandie Dinmont Terrier has existed as a recognised breed type for at least 300 years. First known as ‘pepper and mustard’ Terriers, Dandie Dinmont Terriers were found principally in the Scottish borders, where the breed was commonly owned by gypsies. Like most Terriers, Dandies were used to flush out and kill animals considered pests at the time, in particular badgers and otters.

It was not until the early nineteenth century that Dandies gained greater popularity, as well as the rather whimsical name. The breed shares a common ancestry with the Bedlington Terrier and most probably the Border Terrier, Skye Terrier and Scottish Terrier.

The Dandie has been described as the most placid, easygoing and docile of the Terriers. It is not prone to snappiness or yapping and the breed’s demeanour is one of intelligence and tolerance.

The Dandie is generally friendly to all, old or young, and does not usually initiate conflict with other dogs, though when offended will be a fearless opponent. It is an intelligent and sensitive dog with a big personality and bark for its size.

The Dandie is an achondroplastic breed with short legs, slightly turning out feet good for digging and a sturdy, long and curvaceous body. Most uniquely it has a large head covered with a profuse soft and silky topknot of hair and complemented by tassled ears, large, round and soulful eyes and very big teeth.

The breed’s body is covered by a crisp and linty coat, unlike any of the other working Terriers, and it is bred in two colours: pepper or mustard. In each colour the hair of the legs and topknot are of either a silvery blue (in peppers) or a creamy white (in mustards).

Overall the Dandie is a healthy and hardy little dog. Glaucoma has been identified as a problem in some Dandie bloodlines and there is anecdotal evidence that suggests the breed is more predisposed to some cancers. Other than that, like most dogs it can develop arthritis and other diseases associated with ageing.

Dandies like to be part of the family so generally don’t suit kennel life. The breed can be playful and active but also a loving lap dog. When young, like all puppies, they can be very naughty, disobedient and destructive. Having big personalities, Dandies respond best to a combination of strict guidelines and positive rewards.

The Dandie does not moult, which makes it an excellent house dog. However, its coat does require regular brushing and professional grooming. A show Dandie will need its body coat stripped to maintain colour and texture. The leg furnishings and topknot need regular trimming. Pet Dandies can be clipped and it’s important to keep the hair around the eyes and on the top of the nose trimmed to prevent eye irritation.

Now you know a little about the Dandie Dinmont Terrier, you may think that this is the dog for you. Before you make a decision, please make contact with the breed club or your State controlling body for purebred dogs. They will be able to give you information about available puppies and also suggest dog shows where you can see the breed and speak to breeders. In this way you will gain a better perspective of the Dandie Dinmont Terrier and its needs, and whether this breed would suit your lifestyle.