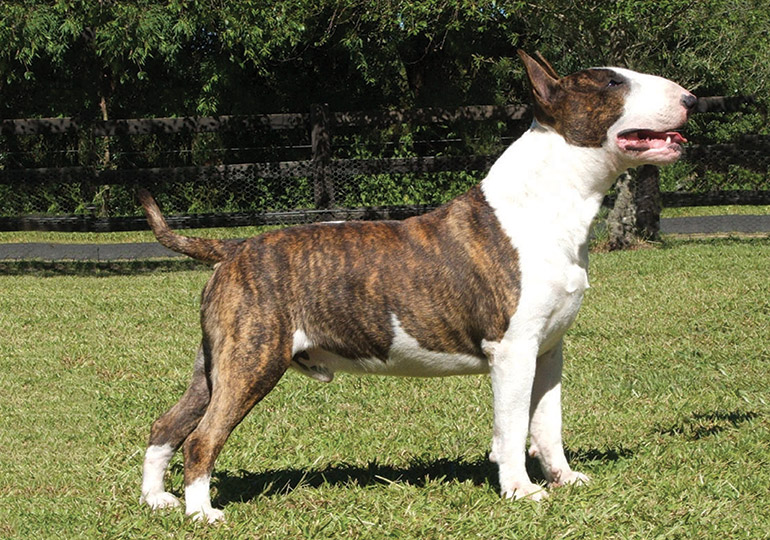 The Bull Terrier as we know it today has its origins in England in the early 1800s. The breed was well established as early as 1830 and was mainly the result of crossing the old style Bulldog with several diﬀerent Terrier breeds. The Bull Terrier was reﬁned over the years to more closely resemble our current dogs and by 1862, with the popularity of the new sport of dog shows, a pure white dog with cleaner lines and longer in head became very fashionable. Colour was introduced by selective breeding to the old style coloured Bull Terrier. Later on, this old style dog was oﬃcially recognised as the Staﬀordshire Bull Terrier.

It is said that the Bull Terrier is the strongest of all dogs and possesses great courage. A unique feature of the breed is its downward faced, egg-shaped head. The head should be strong and deep, right to the end of the muzzle.

Viewed from the front it should be egg-shaped and completely ﬁlled. The breed’s proﬁle curves gently, from the top of the skull to the tip of its nose and its eyes should be as dark as possible and give a piercing glint. The Bull Terrier’s small ears should be placed close together and held stiﬄy erect.

Strongly built and muscular, the Bull Terrier is well balanced and active with a keen, determined and intelligent expression.

The modern Bull Terrier is a medium-sized dog of approximately 30 to 40kg. But in the early days, smaller dogs weighing under 10kg were quite common and are now classed as the Bull Terrier Miniature. These two varieties of the breed share a common breed standard with a height recommendation for the Miniature being the only deviation – it should not exceed a height of 35.5cm.

The Bull Terrier is a relatively healthy breed, but can suﬀer from deafness, heart and kidney disease and some skin conditions. An eye disease called Primary Lens Luxation was prevalent, but found only in the Bull Terrier Miniature. In 2009 the gene marker was discovered for the disease; this now allows breeders the opportunity to eradicate the disease through the use of a simple DNA test.

The Bull Terrier’s coat is short and requires only basic maintenance. If your dog spends a lot of time in the sun, be sure to apply sunscreen. The breed should also be tested for heart and kidney problems.

Owners should be aware that the breed has an extremely high threshold for pain and may not always show symptoms of illness. Life expectancy is between 12 and 14 years.

The breed possesses an even temperament, is highly intelligent, but can also be stubborn. Overall it’s a fun-loving dog that is particularly good with people.

The Bull Terrier is happiest when living with a family and makes a wonderful companion. But as with any breed, care should be taken around small children. When the dogs are younger they are still very powerful and can be quite boisterous.

The breed is equally happy on a rural property as it is in an apartment. It will exercise as much as you want to. The Bull Terrier can be independent minded and stubborn, so should be socialised from an early age.

Now you know a little about the Bull Terrier, you may think that this is the dog for you. Before you make a decision, please make contact with the breed club or your State controlling body for purebred dogs. They will be able to give you information about available puppies and also suggest dog shows where you can see the breed and speak to breeders. In this way you will gain a better perspective of the Bull Terrier and its needs, and whether this breed would suit your lifestyle. 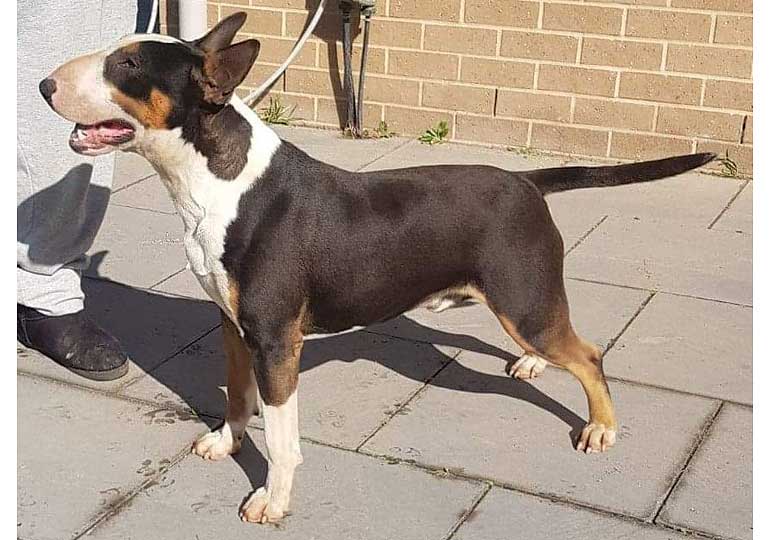