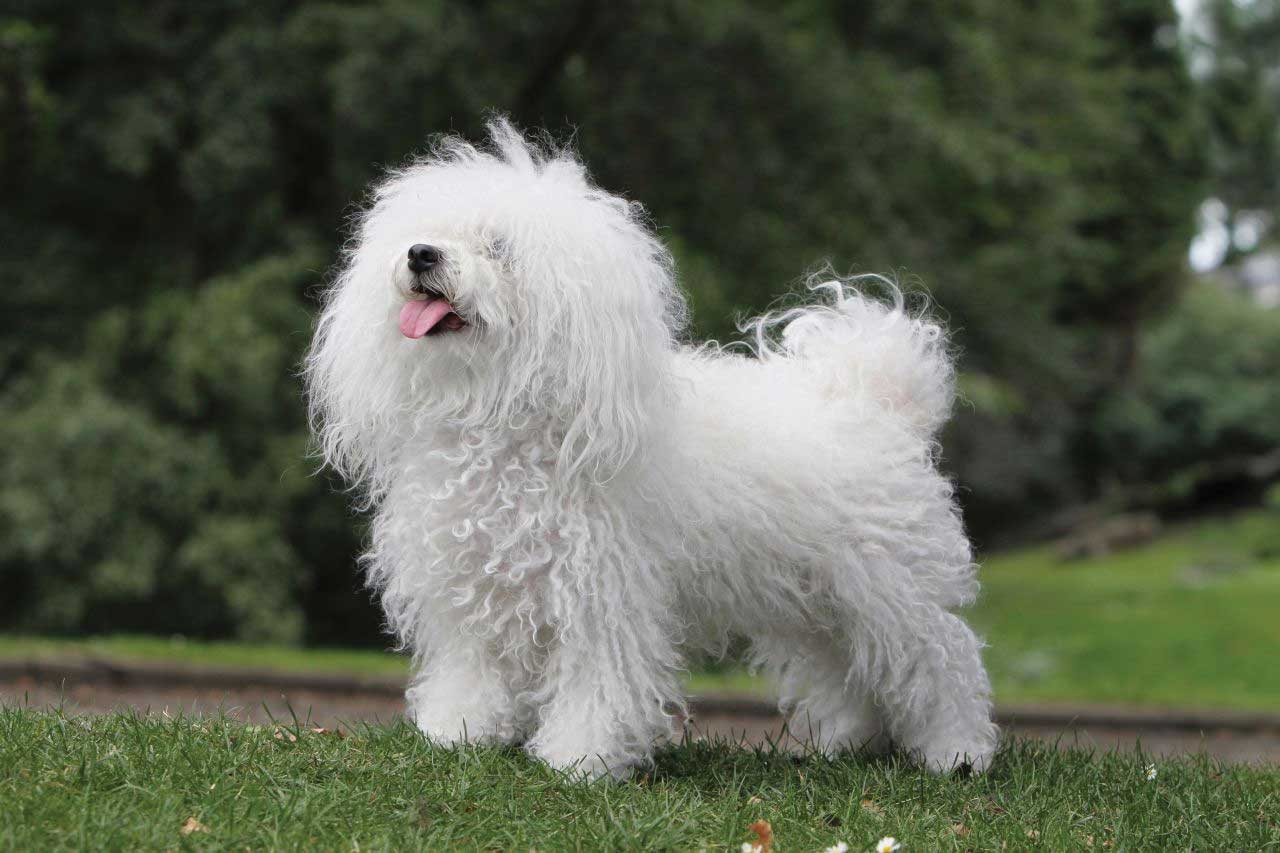 The origin of the Bolognese is confused with that of the Maltese, because their distant ancestors are the same little dogs mentioned in Latin by Aristotle (384–322 B.C.) under the denomination of canes melitenses. Bolognese, already known in the Roman era, appears most especially among the very appreciated gifts, which were made during a whole era by the people of power of that world. Cosimo de Medici (1389–1464) brought no less than eight to Brussels as gifts to as many Belgian noblemen. Philipe II, King of Spain 1556–1598, after having received two as a gift from the Duke d’Este, thanked him in writing saying, ”These little dogs are the most royal gifts one can give to an emperor”. Bolognese are represented in paintings by Titian, Pierre Breughel called le Vieux and Goya. 1.

Small size, stocky and compact, covered with a pure white coat, long and fluffy, the Bolognese have a free, energetic gait, with a noble and distinguished head carriage.

Their coat is long all over the body, from head to tail, from the top line to the feet. It is shorter on the muzzle. Forms long flocks that have the same texture all over the body, rather off-standing coat, thus not falling flat and tight, never shows fringes.

Very serene, generally not very active. Eventful but calm, and very faithful to his master and his entourage. 1.

They can be shy towards strangers, but warm up quickly if they are properly socialised. Prone to separation anxiety, the Bolognese does not do well alone for long periods of time. They would be ill-suited for people with a 9-5 workday. 2.

They would make great apartment dogs, provided they would still have a moderate exercise schedule. As a calm, easy going dog, they would do well as companions for retirees and seniors. Options for exercise could include play time in the backyard, preferably fenced, or taken for walks. Indoor entertainment, like hide-and-seek, chasing a ball rolled along the floor, or teaching them new tricks are excellent low-key activities for the low-energy, but playful, Bolognese.2.

The Bolognese has an all-white coat that is soft and fluffy like the texture of cotton. He is also “non-shedding,” so low to mild allergy sufferers should not be greatly affected. Bolognese coats are unshaped and untrimmed except for around their eyes for sanitary reasons. Regular grooming is needed if the Bolognese is kept in its full coat. For easier maintenance, many people are satisfied with keeping their Bolo in a shorter coat of about one inch, leaving the untrimmed “mop head” around the face. 2.

Beyond regular grooming, the occasional bath will keep your Bolognese clean and looking his best. Nails should be trimmed occasionally with a nail clipper to avoid overgrowth, splitting and cracking. Ears should be checked regularly to avoid a build up of wax and debris, which can result in an infection. Teeth should be brushed regularly. 2.

The majority of Bolognese are healthy dogs, and a responsible breeder will screen breeding stock for health conditions such as luxating patellas (compared to “trick knee” in humans) and eye anomalies. Good breeders utilise health screening and genetic testing to reduce the likelihood of disease in their puppies. 2.

Now you know a little about the Bolognese you may think that this is the dog for you. Before you make a decision, please make contact with the breed club or your State controlling body for purebred dogs. They will be able to give you information about available puppies and also suggest dog shows where you can see the breed and speak to breeders. In this way you will gain a better perspective of the Bolognese, and its needs and whether this breed would suit your lifestyle.