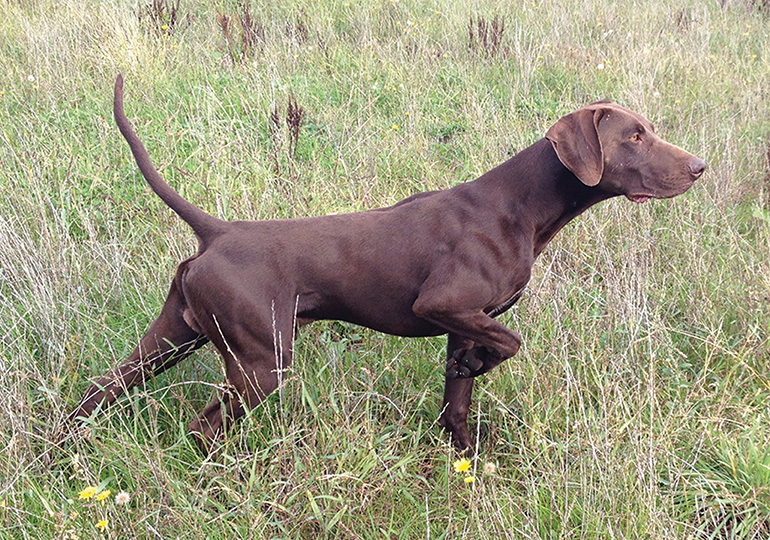 The precise origin of the German Shorthaired Pointer is unclear, however it is likely that the German Shorthaired Pointer is descended from a breed known as the German Bird Dog, which itself is related to the Old Spanish Pointer introduced to Germany in the 17th century. It is also likely that various German hound and tracking dogs, as well as the English Pointer and the Arkwright Pointer also contributed to the development of the breed. However, as the first studbook was not created until 1870, it is impossible to identify all of the dogs that went into creating this breed. 1.

The German Shorthaired Pointer is an all-purpose hunting dog and will hunt both feather and fur. Known occasionally as the ‘Kurzaar’, it is a versatile hunter and all-purpose Gundog capable of high performance in the field and water.

A noble, harmonious dog, this breed is made for endurance, power and speed. Its characteristic features are a noble appearance, graceful outlines, a clean-cut head, a well carried tail and a taut, gleaming coat.

The nose is somewhat protruding. Nostrils sufficiently wide, broad and mobile. Basically brown, however black in black or black roan dogs. A flesh-coloured or spotted nose is only permissible in dogs with white as a basic colour. 2.

Skin: Close and tight, not wrinkly.
Texture: Short and dense, rough and hard to the touch. Somewhat thinner and shorter on the head and ears, not remarkably longer at the underside of the tail. Should cover the whole body. 2.

Colours are Solid brown, without markings, brown with small white or flecked markings at chest and legs, dark brown roan, with brown head, brown patches or specks. The basic colour of such a dog is not brown mixed with white or white with brown, but the coat shows such an even intensive mixture of brown and white, which results in that kind of inconspicuous exterior of the dog ever so valuable for the practical hunt. At the inner sides of the hind legs, as well as the tip of the tail, the colour is often lighter. 2.

German Shorthaired Pointers, along with other sporting dogs, requires a lot of exercise and space to run. GSPs have a lot of energy, they are one of the most energetic breeds. 3. Therefore if not given the right amount of attention, they can become bored and destructive. The breed does not do well left alone all day, or if relegated to a kennel without plenty of human interaction.

German Shorthaired Pointers are a very clean breed. Their short coat needs very little grooming, just occasional brushing. They typically shed constantly and should be bathed only when needed.

Grooming the ‘wash and wear’ coat is easy. All it takes is a warm bath with a good shampoo and towel dry, taking care to dry the ears and keep them clean. Like all dogs with flop ears, GSP can be prone to ear infections and their ears require regular checking and cleaning.

German Shorthaired Pointers will shed their old coat once a year; at thistime, a good groom with a rubber mitt will help the new coat shine through.

Healthy, well cared for German Shorthaired Pointers will usually live for as long as 11 or 12 years, sometimes longer. Like all dogs, they can be prone to some hereditary disease.

Recognising this, responsible breeders work to reduce the incidence of hereditary problems in their breeding so that they can produce healthy puppies.

The German Shorthaired Pointer needs plenty of vigorous activity and thrives with lots of exercise and running. This need for exercise, coupled with the breed's natural instinct to hunt, means that training is an absolute necessity. The breed’s distinctly independent character means that any unused energy will likely result in the dog amusing itself, most probably in an undesirable manner.

Failure by the owner to give this active and intelligent dog sufficient exercise and/or proper training can produce a German Shorthaired Pointer that appears hyperactive or that has destructive tendencies. Thus the breed is not a suitable pet for an inactive home or for inexperienced dog owners. Although these dogs form very strong attachments with their owners, a bored GSP that receives insufficient exercise may feel compelled to exercise himself. These dogs are athletic and can escape from four- to six-foot enclosures with little difficulty.

Regular hunting, running, carting, bikejoring, skijoring, mushing, dog scootering or other vigorous activity can alleviate this desire to escape. The natural instinct to hunt may result in the dog hunting alone and sometimes bringing home occasional dead trophies, such as cats, rats, pigeons and other urban animals. In addition to exercise, especially formal hunting, the GSP needs to be taught to distinguish legitimate prey and off limits animals. 4.

Now you know a little about the German Shorthaired Pointer, you may think that this is the dog for you. Before you make a decision, please make contact with the breed club or your State controlling body for purebred dogs. They will be able to give you information about available puppies and also suggest dog shows where you can see the breed and speak to breeders. In this way you will gain a better perspective of the German Shorthaired Pointer, and its needs and whether this breed would suit your lifestyle. 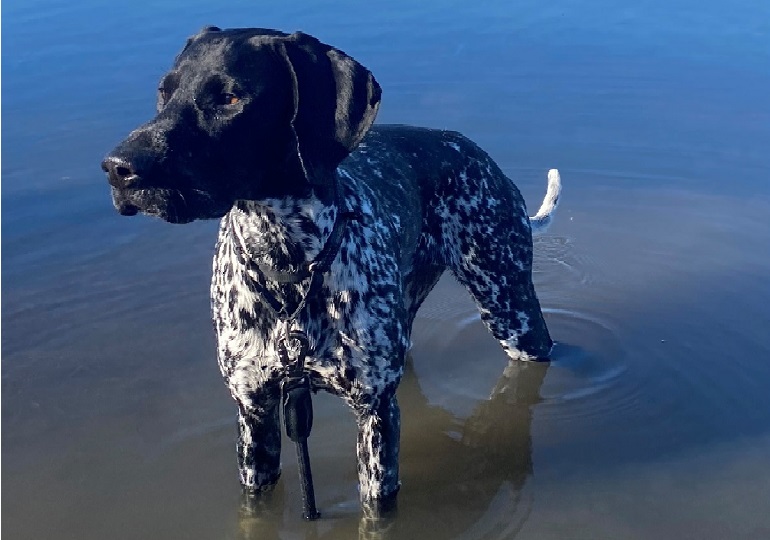