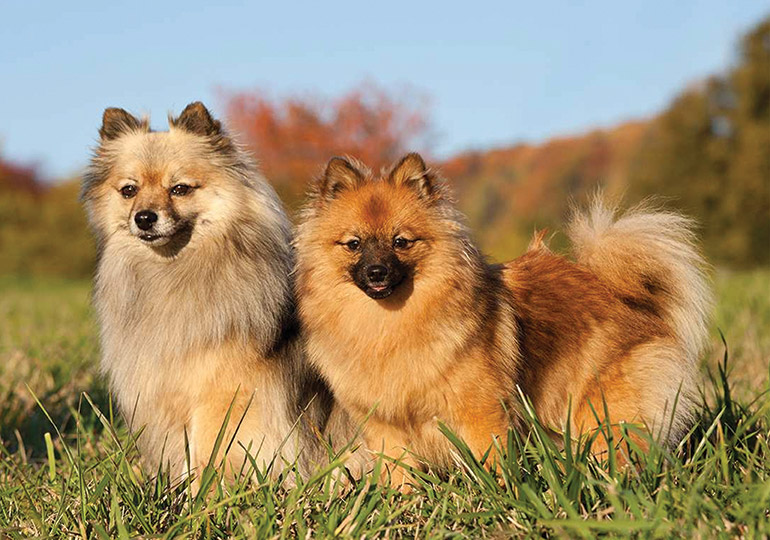 Once a popular member of the European Circus, the German Spitz loves to be active and is always on the lookout for its next adventure.

German Spitz, in both Mittel and Klein sizes, are descended from the Nordic dogs of Europe that originally developed a thick double coat to protect against harsh winters. It is that coat, the lush tail feathering and their typical Spitz characteristics, principally pricked ears, curled tail and wedge-shaped head, which give them so much appeal today.

A German Spitz is compact with an almost square outline and is a dog of substance under the profuse double coat. Contrary to fears, it is not a difficult dog to groom as the coat repels both water and dirt and usually a simple brushing is all that is required to freshen the appearance. An alert dog, the German Spitz is always on the lookout for its next adventure.

A German Spitz is a happy dog that makes a spectacularly loyal companion and effective watchdog. Buoyant and vibrant at play, it is willing to take part in family activities. It is highly social and is now being used as a therapy dog because of its lack of aggression and genuine pleasure it takes from being with people.

Coat care is easy provided brushing is carried out weekly to remove dead coat. As an untrimmed breed in the show ring they are easy to care for and look their best with a minimum of effort. After a run in the park, mud and dirt will fall off and does not stick to or stain the coat. Tidying of the feet is permitted but is a relatively simple task, even for the novice. Twice a year the dog moults its coat and will require more systematic brushing, but for the rest of the year it leaves little hair around the house.

They are a remarkably healthy and usually live to 14 or 15 years without major issues, possibly longer provided they are exercised regularly to keep both body and mind healthy and alert. Long walks and runs are the norm for this active and agile breed and they do well in performance sports where they exhibit an enormous appetite for fun.

A varied diet will ensure a healthy dog and as they are not over-eaters they stay trim.

Being a highly social dog, a German Spitz is an ideal companion and bonds well with either a family or an individual. As they can bond very strongly with a person, it is not appropriate to isolate the dog by leaving it in the back yard or alone for extended periods, as this may result in excess vocalisation.

German Spitz are extremely successful in agility and obedience where they have the runs on the board and are starting to make a name for themselves in tracking and canine freestyle – reminding us of the background many Spitz had in European circuses.

Now you know a little about the German Spitz, you may think that this is the dog for you. Before you make a decision, please make contact with the breed club or your State controlling body for purebred dogs. They will be able to give you information about available puppies and also suggest dog shows where you can see the breed and speak to breeders. In this way you will gain a better perspective of the German Spitz and its needs, and whether this breed would suit your lifestyle.