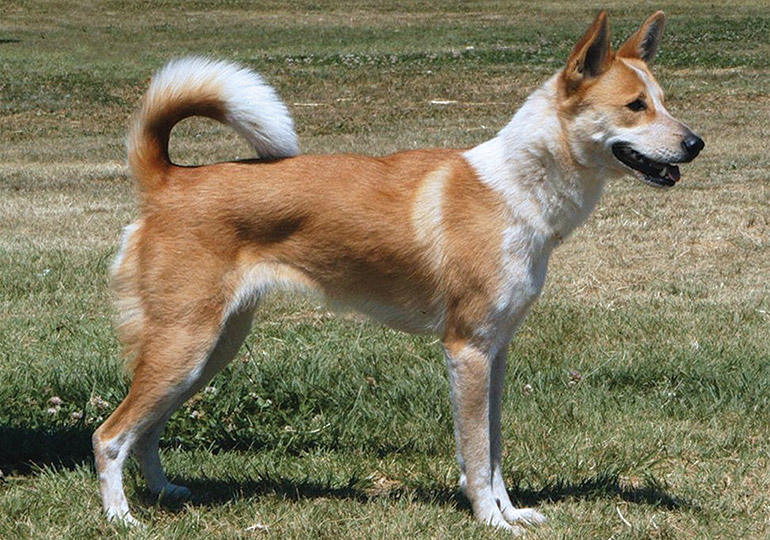 According to tradition, the Canaan dog was the guard and herd dog of the ancient Israelites, guarding their camps and flocks. At the time of the Diaspora, this tradition continues, the Israelites were forcefully removed from their land and had to leave behind their dogs. These dogs reverted to the wild. (1)

Avoiding extinction, they remained undomesticated for the most part, although some lived with the Bedouins and earned their keep by guarding the herds and camps. (2)

Dr. Rudolphina Menzel (1891–1973) used these intelligent scavenger dogs, mainly found in the desert, as guard dogs. In the 1930s Menzel was asked by the Haganah to build up a service dog organisation. She captured a select group of semi-wild individuals, tamed, trained and bred them. Menzel found the dogs highly adaptable, trainable, and easy to domesticate. It took her about six months to capture her first dog, Dugma, and within a few weeks she was able to take him into town and on buses. (3)

She began a breeding program in 1934, providing working dogs for the military and she gave pups to be pets and home guard dogs. She initiated a selective breeding program to produce the breed known today as the Canaan dog. (2)

In 1949 Menzel founded The Institute for Orientation and Mobility of the Blind, and in 1953, she started to train Canaan dogs as guide dogs for the blind. Although she was able to train several dogs, she found that the breed was too independent and too small for general guide dog use, although some of her dogs were used successfully by children. (2)

The first Canaan Dog was brought to the UK from Lebanon in 1965, before they were a recognised breed. In December 1970, they were recognised by the Kennel Club, and the breed was placed in the Utility Group. (2)

On September 7, 1965, Menzel sent four dogs to Ursula Berkowitz of Oxnard, California, the first Canaan dogs in the United States. The Canaan Dog Club of America was formed the same year, and stud book records were kept from these first reports. In June 1989, the Canaan dog entered the American Kennel Club (AKC) Miscellaneous Class. Its profile was raised when John F. Kennedy Jr. purchased a Canaan dog in the 1990s. (4)

The Canaan dog is a typical primitive dog in appearance. It is a medium-sized square built dog, with a wedge-shaped head, erect and low set ears with a broad base and rounded tips. Its outer coat is dense, harsh and straight of short to medium-length. The undercoat should be close and profuse according to season. (2).

The tail is set high, thick brush carried curled over the back.’ Colours are sand to red brown, white, black or spotted, with or without mask If masked, the mask must be symmetrical. The black mask is permitted on all colours and white markings are permitted on all colours. Eyes are ‘dark brown, slightly slanted, almond shaped’ with dark rims. The feet are strong, round and catlike with hard pads. (5)

Alert, quick to react, distrustful of strangers, strongly defensive but not naturally aggressive. Vigilant, not only against man but other animals as well. Extraordinarily devoted and amenable to training. (5)

Canaan dogs have a strong survival instinct. They are quick to react and wary of strangers, and will alert to any disturbances with prompt barking, thus making them excellent watchdogs. Though defensive, they are not aggressive and are very good with children within the family, but may be wary of other children or defensive when your child is playing with another child. They are intelligent and learn quickly, but may get bored with repetitive exercises or ignore commands if they find something of more interest. (2)

In general, the Canaan dog does not suffer from known hereditary problems. Although the breed is one of the healthiest, George A. Padgett, DVM, listed diseases that have been seen, at one time or another, in the Canaan dog: hypothyroidism, epilepsy, progressive retinal atrophy (PRA), cryptorchidism, hip dysplasia, elbow dysplasia, luxating patella, and osteochondritis dissecans (OCD). (2)

Now you know a little about the Canaan Dog, you may think that this is the dog for you. Before you make a decision, please make contact with the breed club or your State controlling body for purebred dogs. They will be able to give you information about available puppies and also suggest dog shows where you can see the breed and speak to breeders. In this way you will gain a better perspective of the Canaan Dog and its needs, and whether this breed would suit your lifestyle.