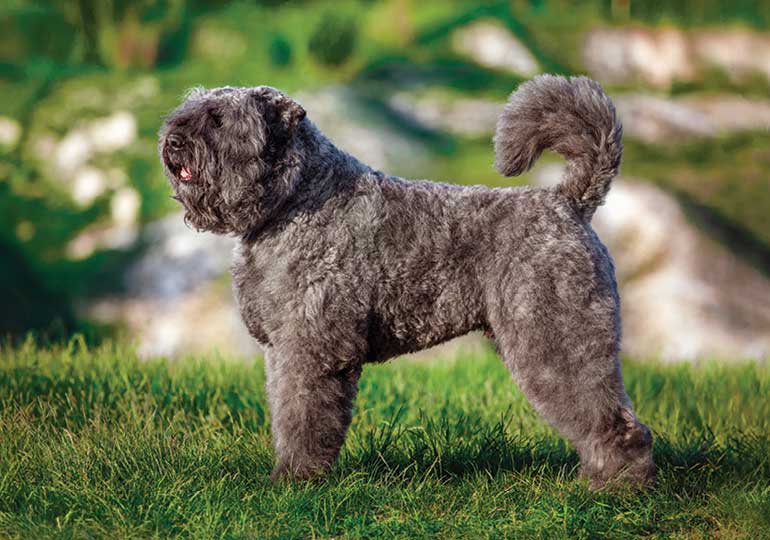 The monks at the Ter Duinen monastery in Flanders were among the earliest known breeders of Flanders. The Bouviers bred by them are recorded as having been bred from imports such as Irish Wolfhounds and Scottish Deerhounds with local farm dogs, until a breed considered to be the predecessor of the modern Bouvier des Flandres was obtained. This became a working dog able to perform tirelessly, herding and guarding cattle and even pulling cargo carts, thanks to its strength and temperament, and to withstand the local weather conditions due to its thick coat. 2. 3.

In medieval times, when the Bouvier was first conceived, Flanders was a principality encompassing parts of modern-day France, Belgium and The Netherlands. (To this day, both France and Belgium claim the Bouvier as a native breed). As the breed’s many early names suggest, moving cattle was the Bouvier’s primary occupation. But the thrifty farmers of France and the Low Countries preferred owning one versatile dog instead of a team of specialists, so Bouviers earned their keep as herders, watch dogs, guardians and cart-pullers. 4.

By the turn of the 20th century, Bouviers were attracting the attention of international dog fanciers far from the farms and pastures of Flanders. A Belgian breed club was formed and French and Belgian experts drew up a written standard. With the outbreak of World War 1, however, the Bouvier’s bucolic homeland became a nightmarish battlefield, where the region’s farmers were displaced and their dogs lost or destroyed. 4.

The Belgian Army was responsible for keeping the breed alive, and Bouviers distinguished themselves as courageous and resourceful dogs of war. In peacetime, Bouviers burnished their resume as European police K-9s and guide dogs for the blind. 4.

Nowadays, the Bouvier des Flandres is above all used as a guard dog for the estate and the farm, and as a defence and police dog. Its physical and behavioural aptitudes, its great qualities of scent, initiative and intelligence warrant its use as a tracking dog, a messenger dog and a gamekeeper’s dog. 1.

The Bouvier des Flandres is a powerfully built, compact, short-coupled, rough coated dog of notably rugged appearance. He gives the impression of great strength without any sign of heaviness or clumsiness in his overall makeup. He is agile, spirited and bold, yet his serene, well behaved disposition denotes his steady, resolute and fearless character. His gaze is alert and brilliant, depicting his intelligence, vigour and daring. By nature he is an equable dog. 4.

The coat is very abundant, the outercoat forming with the dense undercoat a protective layer perfectly adapted to the sudden climatic changes in this breed’s native land. The hair must be coarse to the touch, dry and matt, neither too long nor too short (about 6 cm), slightly tousled but never woolly or curly. Shorter on the head and very short on the outside of the ears. The undercoat is padding made up of fine dense hair, which grows beneath the outer coat and together with the topcoat it forms a waterproof covering. 1.

Colours are usually grey, brindle or overlaid with black. A completely uniform black is also accepted without being favoured. Light coloured, so-called washed-out coats are not acceptable. A white star on the chest is tolerated.1.

The Bouvier des Flandres has the calm, thoughtful character of a sensible, but fearless dog. Its lively look indicates intelligence, energy and audacity. 1.

Bouviers should be socialised well, preferably starting at an early age, to avoid shyness, suspiciousness, and being overly reserved with strangers (although the breed is naturally aloof with strangers). Protection of the family when danger is present is not something that needs to be taught, nor is it something one can train out of them. The dog will rise to the occasion if needed. A good family dog, the Bouvier likes, and is excellent with, children. The Bouvier is very adaptable and goes about its business quietly and calmly. Obedience training starts when they are young. Their behaviour depends on the owner’s ability to communicate what is expected, and on the individual dominance level of the dog. They are usually good with other dogs if they are raised with them from puppyhood. Slow to mature both in body and mind, the Bouvier does not fully mature until the age of 2–3 years. 2.

Their sterling character, huge heart, and keen intelligence endear them to dog lovers the world over. Bouviers are excellent watchdogs and guardians, and eager participants in dog sports, especially herding trials. 4.

The Bouvier is happiest when he has a job to do, whether that job is babysitting, herding, obedience, or guard dog or rescue work. A bored Bouvier can be a very destructive one. Bouviers are easily trained to do almost any type of dog sport or activity, and they usually excel at it. They have a strong prey drive, so should be well socialised from the start. They are consummate showmen and enjoy working or competing with their owner at their side. They are an excellent fit for an active household with an owner who hikes or jogs or even bikes.

The Bouvier needs a large, enclosed exercise area where he can romp and play, preferably with other dogs or kids who will keep him in good condition both mentally and physically. Heavy exercise should be limited while he is a growing puppy.

The Bouvier’s coat needs brushing once or twice a week. A good slicker brush or pin brush and large comb will work for this. The beard may need cleaning at the same time, and the dog’s toenails should be trimmed every week or two. 4.

Now you know a little about the Bouvier des Flandres you may have think that this is the dog for you. Before you make a decision, please make contact with the breed club or your State controlling body for purebred dogs. They will be able to give you information about available puppies and also suggest dog shows where you can see the breed and speak to breeders. In this way you will gain a better perspective of the Bouvier des Flandres and its needs and whether this breed would suit your lifestyle.