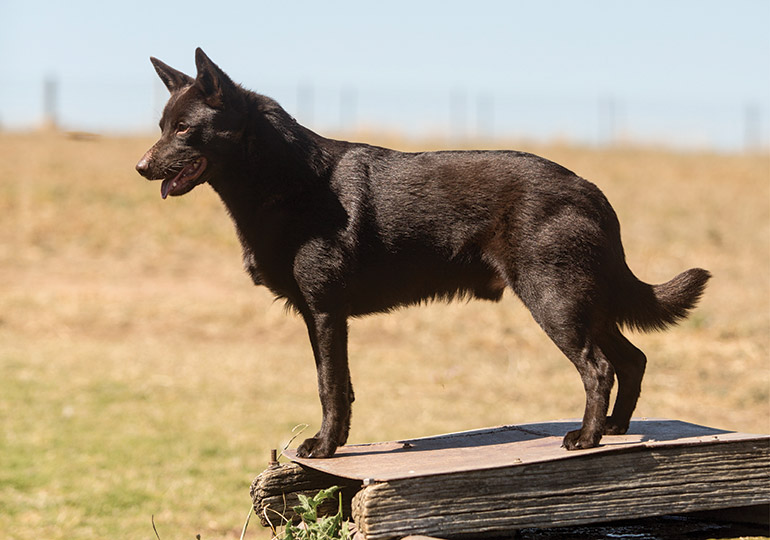 The Australian Kelpie is one of the true Australian breeds with its origins in the rural paddocks of western Victoria. The story goes something like this... it was a dark night in 1870 and Jack Gleeson was sitting beside a creek near Casterton in country Victoria contemplating what to call his new puppy. He had just swapped a horse for her and she was a black and tan female with floppy ears. This mating was the result of two Scotch Collies imported by George Robertson. As the mist rose off the creek he decided to name her “Kelpie” - the word being Gaelic for water sprite. About the same time a Mr Arthur Robinson of Yaraldra Station, Victoria imported a dog “Brutus” and a bitch “Jenny” from Scotland, “Brutus” being a big smooth haired, black and tan dog with pricked ears and “Jenny” a long-haired bitch with half erect ears. These two produced Caesar, Nero and Laddie, with Caesar eventually being mated with Gleeson’s Kelpie to produce “King’s Kelpie”. It is from these beginnings that we have the Australian Kelpie today.

By the late 1870’s Kelpies were winning sheep dog trials in country NSW and Victoria and in 1896 the first Sydney trial was one by the Kelpie “Gay”.

Today the breed is still popular in the working paddocks and in the show, obedience and agility rings and is exported all over the world especially to Norway, Sweden, Finland, Canada and America where they are used for tracking, customs, search and rescue work, plus in the artic regions herding reindeers. The Kelpie was bred to work sheep and for many farmers their dog is worth the wages of several men. Their hardiness and ability work long hours make them a valuable asset, but it is their devotion and loyalty to their family that makes them a suitable pet for today’s families.

The general appearance is of a dog that is slightly longer than taller, lithe, athletic and muscular. The Kelpie should look and feel like it can do a day’s work without any effort. They have a tractable nature, are highly intelligent, alert and eager to please.

The gait is a four-square gait and the Kelpie must be perfectly sound as even the show dog must display a ground covering gait in recognition of the work that the Kelpie was bred to perform. When herding the Kelpie must be able to turn suddenly at speed and be capable of couching, stealthy creeping towards the intended animals.

The reason the eyes must be almond shaped is to avoid dust getting into them from the paddock or yard. If they had big round eyes they would be more open and susceptible to dirt. The ears should be pricked and the inside of them are well furnished with hair to keep out the dust of the sheep yards.

The Australian Kelpie comes in seven colours black, black and tan, red, red and tan, chocolate, fawn, and blue, any deviation from these colours is not acceptable in the show ring.

Personality is the Kelpie: oodles of personality, a wicked sense of humour, they can be cheeky and mischievous. It is often thought that the Kelpie needs hours and miles of exercise, which is not the case. A breed with exceptionally high IQ, he will quickly get into mischief if he is always left to his own devices. His greatest joy is tender loving care.

His greatest disappointment is inactivity and lack of attention.Kelpies are velcro dogs, where their humans are that is where they are, whether it is in the garden, going for walks or on the lounge watching television.

They can be reserved and timid with strangers and this makes them good watchdogs but as they are not biters, they are not regarded as good guard dogs.

Hip Dysplasia, Progressive Retinal Atrophy (PRA) and Cerebellar Abiotrophy (CA) are said to exist in the breed, however the Kelpie is a relative healthy breed with very few hereditary problems. For further information on these hereditary problems it is best to seek out registered breeders. As the Kelpie is a moderate dog and has been bred to be hardy they have very few health issues throughout their life.

The Australian Kelpie is suitable for families and singles, who are willing to make their dog part of their family. Kelpies do not like to be left out, because of their medium size and wash and wear coat they can be included in most activities and once trained will give more back than they take.

Words: Megan Kain on behalf of the Australian Kelpie Club of NSW Inc

Now you know a little about the Australian Kelpie you may have think that this is the dog for you. Before you make a decision, please make contact with the breed club or your State controlling body for purebred dogs. They will be able to give you information about available puppies and also suggest dog shows where you can see the breed and speak to breeders. In this way you will gain a better perspective of the Australian Kelpie and its needs and whether this breed would suit your lifestyle. 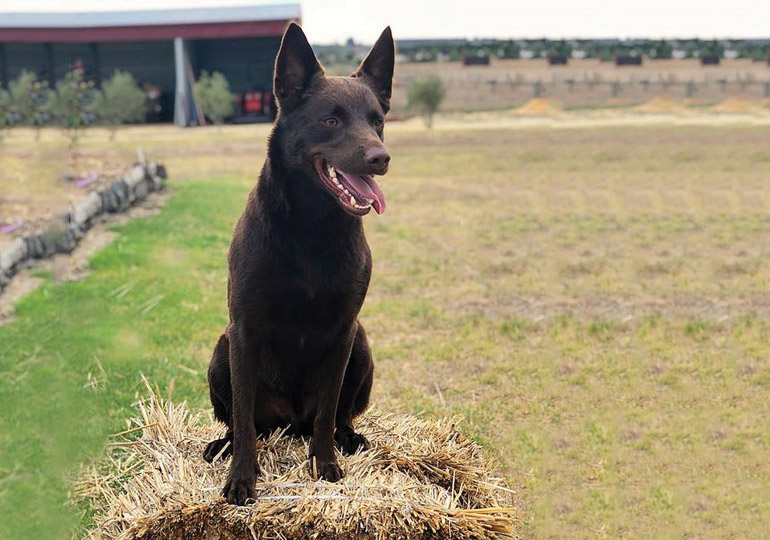