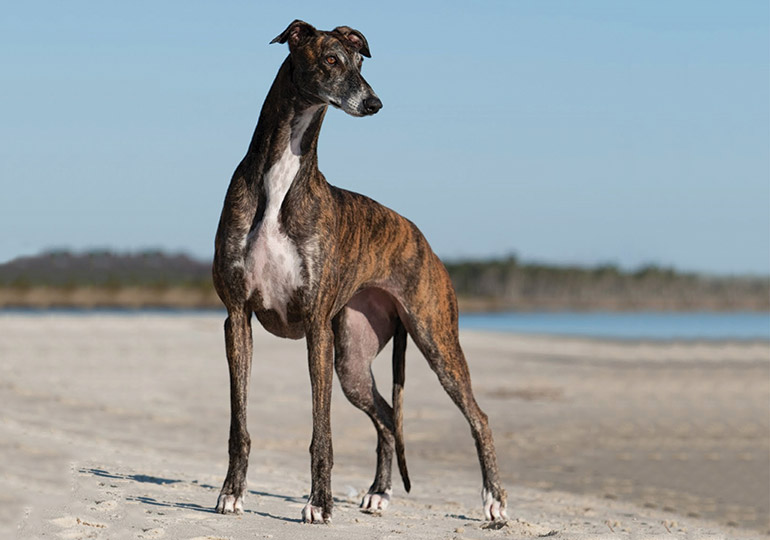 The exact historical origin of the Greyhound is unknown, although thought to be Africa, Greece, Middle East, or Turkey. Centuries of breeding have resulted in one of the most remarkable breeds of dog known to man. A very ancient breed, some say it dates back over 4,000 years ago, making it the oldest purebred canine. It is a sighthound,  which has been historically bred for coursing game and now also for Greyhound racing.

Greyhounds primarily hunt by eyesight, as opposed to other canines, which use scent. Greyhounds have the ability to see distances up to half a mile away (805 metres). A characteristic of the sighthound is the instinct to chase, and Greyhounds are noted for reaching speeds up to 45 mph (73 kph) in three strides.

Greyhound-like canines have appeared throughout the centuries in artistry, pottery, literature and within the tombs of the ancient pyramids. Regardless of their exact lineage and name derivation, they are one of the more unique breeds in the world that are recognised for their elegant appearance, grace, gentleness, loyalty, agility and speed.

These remarkable creatures have been a symbol of pride and respect for many great civilisations. The following are just some of the impressions they have made throughout history:

The first evidence of long, lean canines resembling the Greyhound appeared in temple drawings in the city of Catal-Huyuk in Turkey, dating back to 6000 BC, depicting a Greyhound-like canine assisting a hunter.

Greyhounds were the most valuable possession of the Egyptian Pharaohs, including Cleopatra and King Tutankhamen, and were often carved into the walls of the tombs of Pharaohs or mummified alongside their masters. In ancient Egypt, the birth of a Greyhound was often second in importance to the birth of a son. Entire families would mourn the passing of a Greyhound by shaving their heads, fasting, and weeping out loud.

The first mention of any canine breed in literature dates back around 800 BC. In Greek literature, a book called “The Odyssey”, told the story of a man named Odysseus, who left home for 20 years. When he arrived home, the only one who recognised him was his Greyhound, “Argus”, who was only a puppy when he left.

The Greyhound is the only canine breed to be mentioned in The Bible, Proverbs 30: 29-31.

During the Middle Ages, Greyhounds nearly became extinct, due to famine and disease. Fortunately, priests and clergymen took special care to protect the Greyhounds and later bred them for noblemen.

In the year 1014, King Canute enacted the Forest Laws, stating only persons of nobility were permitted to own a Greyhound.

Greyhounds come in colours that range from white to black, from brindle (“tiger striped”) to blue (“grey”), from fawn to red - and any combination of these colours and white.

The size of Greyhounds vary, depending on whether you choose a male or a female. Males weigh between 30 and 39 kilos, and females weigh between 21 and 30 kilos. Height at the shoulder is ideally: Dogs 71-76 cms (28-30 ins), Bitches 69-71 cms (27-28 ins). Greyhounds are very ‘small’ large dogs. They are almost cat-like in their ability to get into the smallest places and curl into the smallest ball.

The modern day Greyhound still retains all the attributes that made it so treasured throughout the centuries. Known for their gentleness, patience, and sensitivity, they have personalities that want to please their families and to bond deeply with them. They are one of the most loyal companions, and extremely intelligent.

Although large dogs, Greyhounds can live to be 12 to 14 years old. Since they are athletes, they tend to be a very healthy and robust breed. Greyhounds do not have any of the inherent health problems which some of the large breeds experience.

One important point to remember is that Greyhounds do not have the body fat that most canines have (less than 16%), which is less than half the amount of dogs of a similar weight in other breeds. Therefore Greyhounds cannot metabolise anaesthesia well. Be sure your vet is familiar with this fact, as the amount of anaesthesia given to a 35kg Dobermann would be fatal to a 35kg Greyhound!

Greyhounds should never be kept outside for an extended period of time. Due to their lack of body fat and very thin skin, they do not adjust well to very hot or very cold weather.

Although Greyhounds do shed, it is very little. A rubdown with a damp rag or dog brush, will keep the shedding down to a minimum. They are very clean and do not have a "doggy" odour, unlike most other canines. Greyhounds tend to be better tolerated by those with allergies.

When properly introduced and managed, most can live in harmony with other pets, such as birds, cats, small animals, and other exotic pets.

Because they tend to take on the activity level of the household in which they live, Greyhounds may need as little as turn-outs in your fenced-in backyard, to a couple of daily walks. Basically, Greyhounds are “73 kph Couch Potatoes.”

Now you know a little about the Greyhound you may have think that this is the dog for you. Before you make a decision, please make contact with the breed club or your State controlling body for purebred dogs. They will be able to give you information about available puppies and also suggest dog shows where you can see the breed and speak to breeders. In this way you will gain a better perspective of the Greyhound and its needs and whether this breed would suit your lifestyle.