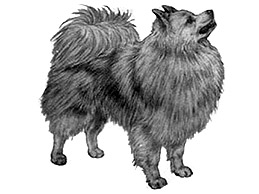 Revised by the Kennel Club in August and December 1995

Compact, short coupled and well knit with an almost square outline. Firm condition, the profuse coat not disguising any lack of substance.

The German Spitz is intelligent, active and alert. Its buoyancy, independence and devotion to the family are the breed characteristics.

Happy, equable disposition, showing confidence, with no sign of nervousness or aggression.

Medium large, broad and nearly flat skull when viewed from above and narrowing in a wedge shape to the nose. Stop moderately defined; muzzle approximately half length of head. Cheeks clean. Flews tight, no trace of lippiness.

Clean, moderately short and well set into the shoulders.

Moderately sloping shoulder; upper arm of sufficient length to ensure elbow is vertically below point of withers. Moderate forechest. Elbows equidistant between ground and withers, turning neither in nor out. Well-boned, straight legs. Pasterns strong and flexible.

Length from point of shoulder to point of buttock equal to height at withers; short, well-developed loin. Moderate tuck-up. Well ribbed-up and rounded. Distance from brisket to ground not less than half the height from ground to withers. Top-line level.

Moderate angulation with hocks moderately well let down. Neither cow hocked nor wide behind.

High set, curled right up from root, lying curled over back.

Moving without exaggeration from any angle. Straight coming and going. Viewed from side, effortless, brisk action, retaining topline.

Double coat consisting of a soft woolly undercoat and a long harsh textured perfectly straight top coat covering the whole of the body. Abundant around neck and forequarters with a frill of profuse, but not excessive, off standing straight hair extending over the shoulders. Forelimbs well feathered tapering from elbows to pasterns. Hind limbs feathered to hocks. Ears covered with soft short hair, Hair on the face smooth and short. Tail profusely covered with long spreading hair. This is not a trimmed breed and evidence of trimming and shaping, other than tidying of the feet, anal area and the legs below the hocks, unacceptable.

All colour varieties and markings acceptable, with the exception of merle. Butterfly pigment not permitted with any colour.