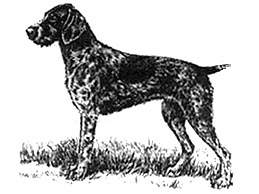 Adopted in Australia May 1995

A pointing dog of noble appearance, with harsh coat completely protecting the skin, with an attentive expression full of energy. The movement should be powerful, ground covering, flowing and harmonious.
Important proportions: The length of the body and the height at withers should be as equal as possible. The length of the body may exceed the height at withers by up to 3 cm.

The German Wirehaired Pointer is a versatile working gundog that must possess all the dispositions asked for the breed. He must be usable for all the work in the field, in the woods and in the water before and after the shot.

Firm, self controlled, well-balanced, without shyness of game, neither sensitive when shots are fired nor shy or aggressive.

As dark as possible, neither too deep set nor protruding, with an alert, lively expression. Eyerims well pigmented and close fitting.

Of medium size, set on high and wide, not twisted.

Large teeth. Powerful jaws with a regular, complete scissor bite with the upper teeth closely overlapping the lower teeth and set square to the jaws. 42 teeth according to the dentition formula.

Viewed from the front, straight and parallel, viewed from the side, legs set well under the body. The distance from the elbows to the ground to be approximately equal to the distance from the elbows to the withers.
Shoulders: Well laid back, sloping shoulder blade, strongly muscled. Forming a good angle together with the upper arm. Upper Arm: As long as possible, with well developed, lean muscles.
Elbows: Close to the body, neither turning in nor out. Good angulation between upper arm and forearm.
Forearm: Lean, set perpendicular, strong bones.
Carpal Joint: Strong.
Pasterns: Slightly sloping

Oval-round with well knit toes and sufficiently thick, tough, robust and well-pigmented pads. They are set parallel, neither turning in nor out in stance or when moving.

Following the topline, carried as horizontally as possible or slightly raised, but not steep. Neither too thick or too thin. Docked for the hunting purposes. (In countries where docking is prohibited by law, the tail may be left natural. It should reach to the hocks and should be carried straight or slightly sabre-like.)

Covering lots of ground, with good reach and drive, parallel coming and going; with upstanding posture.

Skin: Tight, close fitting, without folds.
Wirehaired, harsh, flat lying and dense. Outer coat approximately 2 to 4 cm long; dense water resistant undercoat. The outlines of the body may not be obscured by longer coat. Through its harshness and density it should provide as good protection against weather and injuries as possible. The lower parts of the legs, as well as the lower region of the brisket and the belly, should be shorter but densely coated, the head and the ears to be shorter and at the same time denser but never softer coated. Pronounced eyebrows and a well developed not too long, as harsh as possible beard emphasise the determined expression.

Any departure from the foregoing points should be considered a fault and the seriousness with which the fault should be regarded should be in exact proportion to its degree and its effect upon the health and welfare of the dog, and on the dog’s ability to perform its traditional work.