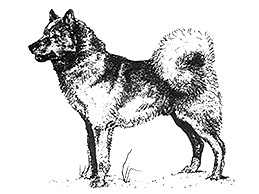 Effective in Australia from 1 January 2000

It is known that already hundreds of years ago dogs of this type were used for all game hunting over the whole country. Originally the main goal was to develop a dog that barked well at game up in trees and was also beautiful. When the register of the breed started in the 1890s, individuals similar in type and hunting purpose were found mainly in the eastern and northern parts of the country.

The first breed standard was established in 1892. The first breed show was held the same year and the first bird-hunting trial in 1897.  Today the breed is very common in both Finland and Sweden. It has been developed from pure natural stock and is an essential part of the Finnish culture. The Finnish Spitz was named as the National Dog of Finland in 1979.

According to the agreement between the Finnish Kennel Club and the Russian Cynological Federation that was signed
in 2006 the Karelian-Finnish Laika and the Finnish Spitz were combined as one breed under the breed standard of the Finnish Spitz.

Smaller than medium-sized, almost square. In conformation lean, firm and carries himself well.

Lively, vigorous, brave and determined. Might be a little reserved towards strangers, but never vicious.

Cranial Region:
Skull: Viewed from above egg-shaped broadening gradually towards the ears. Skull is broadest between the ears. Viewed from the front and in profile the skull is slightly convex. The upper axes of the skull and muzzle are almost parallel. The frontal furrow is very shallow. The superciliary ridges and the occiput are slightly visible.
Stop: Not very pronounced, the angle between the nasal bridge and the skull is clearly marked.

Facial region:
Nose: Rather small, jet-black.
Muzzle: Viewed from above and in profile evenly tapering, rather narrow, not fleshy. The nasal bridge is straight. The lower jaw is clearly defined.
Lips: Tight, rather thin and close fitting. Good pigmentation.
Jaws: The jaws are strong.
Cheeks: The zygomatic arches are slightly emphasized.

Medium-sized, almond-shaped, slightly oblique and preferably dark. The expression is lively and alert.

The teeth are well developed and symmetrical; 42 teeth, according to the dentition formula. Close fitting scissor bite.

Muscular; it appears to be rather short in males due to the thick ruff, of medium length in bitches. Throat without dewlap.

General appearance: Viewed from the front straight and parallel. The bone is of moderate strength. The upper arm is a little shorter than the shoulder blade and the forearm.
Shoulder: Firm, very mobile and not very oblique.
Upper arm: A little shorter than the shoulder blade. Slightly sloping and strong.
Elbow: Placed in front of a vertical line drawn from the point of shoulder; pointing straight backwards.
Forearm: Moderately strong, vertical.
Metacarpus (Pastern): Of moderate length, only slightly sloping and flexible.

Curved forward from the set-on tightly along the back, then hanging down- and slightly tilted towards the rear and pressed
against the thigh, the tip of the tail to reach down to the middle of the thigh. When straightened reaches approximately down to the hocks.

Light, effortless and covering the ground.  Changes easily from trot to gallop, the latter being the most natural style of movement. The legs move parallel. When rushing after game explosively fast gallop.

Skin: Tight overall without wrinkles.
Hair: Moderately long on the body, stand-off coat, semi or fully, stiffer stand-off on the neck, shoulders and back.  On the head and the legs, except the back of the hindquarters, coat is short and close-lying. The stiff hair on the shoulders, especially in males is noticeably longer and coarser. On the trousers and on the tail the hair is long and dense. The undercoat is short, soft, dense and light in colour.

The hair on the back is bright red or golden red, preferably a bright colour.  A lighter shade is inside the ears, on cheeks, throat and chest, belly, inside the legs, back of the thighs and on the tail. A small white spot on the chest and small white markings on the feet are permitted.

Any departure from the foregoing points should be considered a fault and the seriousness with which the fault should be
regarded should be in exact proportion to its degree and its effect upon the health and welfare of the dog and on its ability to perform its traditional work.

DISQUALIFYING FAULTS:
· Aggressive or overly shy dogs.
· Any dog clearly showing physical or behavioural abnormalities should be disqualified.
· Other than erect ears.
· Other than black nose.
· Eyes bright yellow or wall eye.
· Overshot or undershot mouth.
· Kinked tail.
· Large white markings on the chest and/or a white sock.
· Colours differing severely from the basic colour.
· Wavy or curled coat.
· Height other than given in the standard.
· Several missing teeth (three or more).

· Male animals should have two apparently normal testicles fully descended into the scrotum.
· Only functionally and clinically healthy dogs, with breed typical conformation, should be used for breeding.