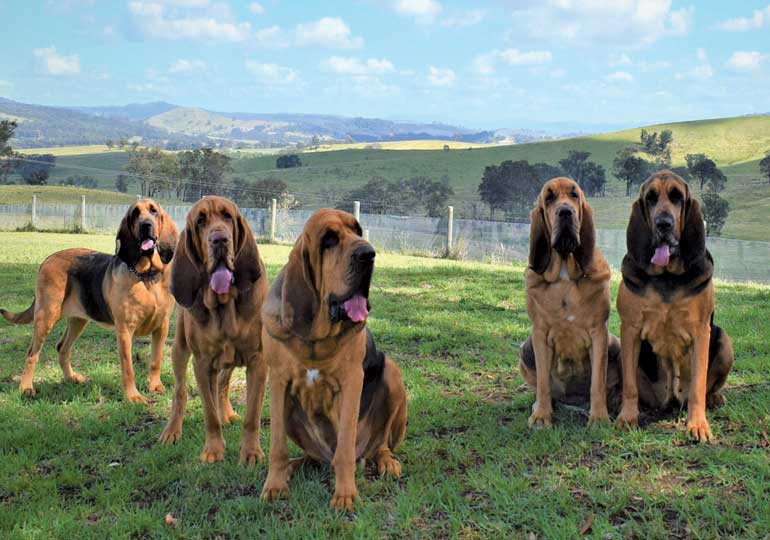 The Bloodhound possesses, in a most marked degree, every point and characteristic of those dogs which hunt together by scent (Sagaces). Of the scent hounds the Bloodhound has the most size, the most power, and the most skin. He is the ultimate trailing machine.

They have a history that extends back to the 7th century AD in Belgium and France. Today's Bloodhounds are descended from those hounds, bred by Hubert, a 7th-century monk, who later became patron saint of hunters, and from hounds bred by other medieval noblemen who kept scent hounds as hunting dogs. Many strains, including hounds brought back to Europe by the Crusaders from the Holy Land, have blended to produce today's gentle giants. It was not until the 16th century that the Bloodhound was used to track humans. The breed’s name was derived from the expression “blooded hound”, meaning a hound of pure breeding.

Bloodhounds are pack hounds and should be easy-going, an affectionate and extremely gentle hound. They can, however, be reserved with strangers. The breed can be rather stubborn and Obedience training should be started early, practised regularly, and made as much fun as possible. The Bloodhound is easily distracted, and training should be kept short, especially whilst young. While it’s beautiful to watch the breed’s head go down and its tail go up, as it picks up a scent trail, it’s important to note it can be almost impossible to call a Bloodhound back.

The Bloodhound is very powerful and stands over more ground than is usual with hounds of other breeds. The skin should be surprisingly loose and velvety, especially around the head. The ears are long, low, and soft. The deep lip continues into loose folds of skin, the flews, which themselves merge into folds of dewlap under the jaw and neck. This excess skin, and the slobber that accumulates on it, helps to trap the scent particles. The pendulous ears, far longer than the muzzle, sweep the scent toward the large nostrils.

As the dog lowers its head, wrinkles will form over the eyes, yet as it looks up the skin slides smoothly rearward. This “superabundance” of skin also protects the eyes from rough vegetation and brambles. The skin easily stretches if snagged, pulling the offending branch along with it, until the skin is able to slide off and catch up with the dog. A well-made bloodhound almost never suffers lacerations, no matter how rough its territory.

The skull is narrow, relatively flat at the sides, and sporting a pronounced occipital peak. Skull planes, viewed from either the side or from the top, ideally are parallel not divergent. The standard describes the expression as “noble and dignified, and characterised by solemnity, wisdom and power”. The weight of the skin pulls the eye rims into lozenge or diamond shapes and usually exposes varying amounts of pink haw.

A very powerful endurance dog, it can travel over great distances at a steady gait in pursuit of a trail.

The breed’s colours are black and tan, liver and tan, and red. A small amount of white is permissible on the chest, toes and tip of the tail.

Although a fairly healthy breed, when bred responsibly, with a life span of eight to 12 years, the breed does have a few health issues that buyers should be aware of. Eye problems such as Entropion and ectropion can be a problem for the breed and like most deep chested dogs, bloat can be a concern. Hip and Elbow Dysplasia can affect the breed & as such all reputable registered breeders should be health testing their breeding animals through the ANKC ORCHID scheme. Along with the hip & elbow testing, cardiac screening by a Cardiologist (echo preferred – breed can be affected by SAS) should be carried out and DNA testing for DM – Degenerative Myelopathy. Skin problems can also occur in the breed, due to the abundance of skin folds, so daily management is advised.

The coat is smooth, short and weatherproof and easily maintained. Regular baths, especially in the summer months, and weekly grooming with a rubber mitt will keep your Bloodhound in good shape.

Bloodhounds find having their nails trimmed particularly unpleasant, so it’s advised that they are done routinely each fortnight from a very early age, otherwise it can become quite problematic.

Activities that can help to keep your Hound fit and well, other than a regular daily walk, include swimming, fetch and nose works games, which the Bloodhound loves.

The Bloodhound does require some specific maintenance. Those long ears and deep folds need daily attention. Wearing a snood at meal times can assist with messy ears and with regular drying under the neck and dewlaps goes a long way to keeping fungal infections away.

The Bloodhound is usually very good with children (care with toddlers as they can potentially knock them over) and other animals; however the breed is not for everyone. Youngsters can be extremely clumsy around the house and as an adult it can hurl slobber for metres, even reaching the ceiling.

Bloodhounds require a fully fenced yard, with a minimum height of about 5ft, and regular daily exercise. The breed needs to be on-lead for any exercise taking place outside a secure area, as that wonderful nose it is known for often leads to trouble.

Now you know a little about the Bloodhound you may have think that this is the dog for you. Before you make a decision, please make contact with the breed club or your State controlling body for purebred dogs. They will be able to give you information about available puppies and also suggest dog shows where you can see the breed and speak to breeders. In this way you will gain a better perspective of the Bloodhound and its needs and whether this breed would suit your lifestyle. 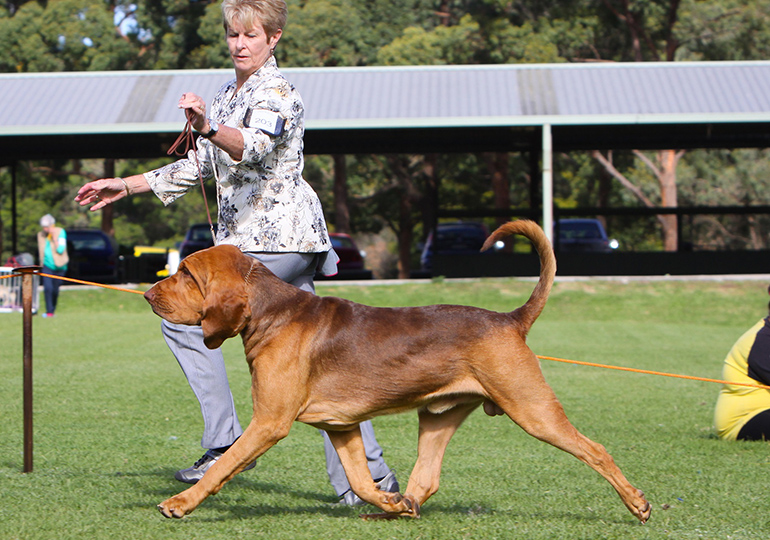